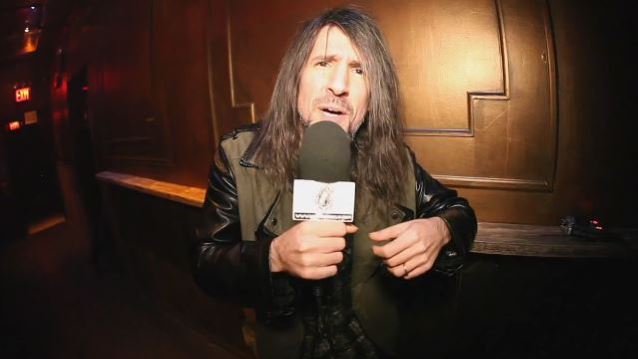 GUNS N' ROSES' BUMBLEFOOT To Focus On His Solo Career: 'I've Tried To Do Both, And It's Been Really Difficult'

GUNS N' ROSES guitarist Ron "Bumblefoot" Thal says that he is focusing on his solo career after spending eight years playing in the Axl Rose-fronted band.

Thal, who is putting the finishing touches on his next solo album, held a press event on Friday, December 12 at The Good Room in Greenpoint, Brooklyn, New York, where he gave attendees a taste of the upcoming CD.

Speaking to Jo Schüftan of Horns Up Rocks! at the listening party, Thal stated about his future with GUNS N' ROSES (see video below): "I'm focusing on my stuff."

He added: "I'm sure it's gonna be an exciting, interesting year for everybody — for GUNS, for me, for everybody. A lot of stokes in the fire… for them, for me. We'll see what happens in 2015."

Thal went on to confirm that he will spend his most of his time nurturing his solo career, something that he has been unable to do properly while he was a member of GUNS N' ROSES. "It's what I've done my whole life, and I've tried to do both, and it's been really difficult," he explained. "There's only so much time, and you can't be in two places at once. Teleporters, no; army of clones, no. You can only be in one place at one time, and that kind of gets in the way of things, and you have to start making choices."

Ron also revealed that he underwent surgery in January to remove a cancerous tumor and that he is now cancer free.

"It was really a quick thing," he said. "I mean, it doesn't compare to people that really have it and really fought it. For me, I was lucky. It didn't spread, it didn't get worse. They cut it out and that's it. But, yeah, it happens. Shit happens."

Thal's last solo album was 2008's "Abnormal" and the guitarist recenty admitted that he missed working on his own material. He told The National: "The solo albums are everything to me and it's really what I do. To be honest, I really should have paid more attention to it, even when I was in GUNS N' ROSES. I should have been touring more and putting out more albums than I did."

He continued: "When you are on the road, you are either sleeping or playing. When you do have some free time, you need to sort of step away and recharge your batteries or you burn out. For me, when I am on tour like that, I find it very hard to get into that creative zone of recording."

"It's very hard to bust out anything when life becomes more complicated or you have more people trying to pull you in a million different directions or distract you. The bigger a band gets, the more that happens; so at Axl's level, it's definitely not easy and there's a million fires to put out where at my level there is maybe ten fires or even two fires. [laughs]"

Thal added: "When there's not as many things or people distracting you or keeping you from getting in the zone, it really frees you up to do the simple stuff and things don't need to be so complicated. But I've realized that all those complications that are hurled at you, all of those distractions, they're all external, and they don't need to penetrate your skin and get into who you are, or stop you from doing what you do, or change the relationship that you have with music or creating it or releasing it or sharing it or performing it or anything. I've realized that can be untouchable and nobody can change that. People will try, and people will continue to try relentlessly, but they can't, unless you give them the power. Once you realize that as an artist, you realize that you can do anything you wanna do musically and there's really nothing at all that's truly stopping you after all."