GUNS N' ROSES' headlining concert Tuesday night (July 5) at Glasgow Green in Glasgow, United Kingdom has been canceled "due to illness and medical advice". The gig was officially called off around 9:15 p.m. on Monday night.

Fans have been urged to keep their tickets and await any further updates on plans to reschedule the gig.

Earlier today, GUNS N' ROSES issued the following statement regarding the cancelation: "Sadly, due to illness and medical advice, GUNS N' ROSES will not be able to perform in Glasgow, tomorrow, July, 5.

"We are working on rescheduling options for this show so please hold onto your tickets and wait for a further update."

Some of the GUNS N' ROSES fans who attended the band's two concerts at the Tottenham Hotspur Stadium in London last week complained about doors opening two hours late and various sound problems during the GN'R performances, making it difficult for the people in the back of the venue to hear frontman Axl Rose's vocals. At the second concert on July 2, Rose told the crowd he was "having issues" with his voice, forcing GUNS N' ROSES to play a truncated 19-song set, omitting such concert staples as "November Rain", which has been performed at every GN'R show since 2016.

Due to illness and medical advice, @gunsnroses will not be able to perform in Glasgow tomorrow.
Ticket buyers have been contacted by their point of purchase and we will be in touch about the rescheduled date. pic.twitter.com/wbjxysmHss 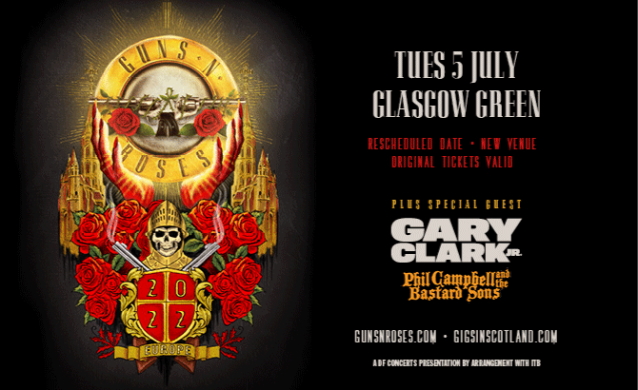