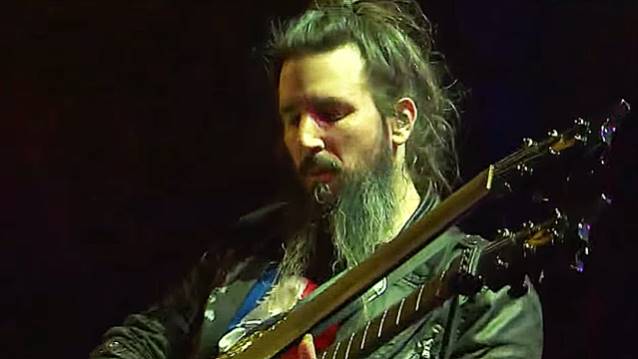 GUNS N' ROSES Guitarist BUMBLEFOOT: 'Anything You're Playing, Your Heart Should Be In It'

Steven Rosen of Ultimate-Guitar.com recently conducted an interview with GUNS N' ROSES guitarist Ron "Bumblefoot" Thal. A couple of excerpts from the chat follow below.

Ultimate-Guitar.com: How challenging is it for you as a guitarist to play the music of GUNS N' ROSES?

Thal: I don't think the GUNS music is different from any music when it comes to that. Anything you're playing, your heart should be in it. That should always happen. You've just gotta be good enough to play whatever songs you're playing. Actually I need to be twice as good so this way you don't really have to think about it and if you're not at 100 percent, it's not gonna really ruin anything, hah hah hah. You're not gonna cause too much damage. You always have to be twice as good as whatever you're doing.

Ultimate-Guitar.com: That's a unique way to look at it.

Thal: Definitely with GN'R because it's not my own music, there are a lot of things you have to consider. For one thing, you don't want to go reinterpreting a song that people came there to hear a certain way they've grown with and are attached to. They don't want to hear you improvising. They wanna hear the melodies they love and wanted to hear. So you can't go rewriting a song just to be self-indulgent.

Thal: Definitely, yeah. It's a respect thing and a respect for the music and the audience. You have to realize it's not all about you — it's about them and what they should be getting.

Ultimate-Guitar.com: When you first joined GUNS N' ROSES, how aware were you of joining this iconic band and replacing Slash?

Thal: I looked at it not as pressure as in, "I need to be better than anyone" other than just being better than myself. For me my attitude was, "OK, I've been handed the torch and it's up to me to run with it as long as I can until it's time for me to hand over the torch or until the torch goes out or whatever's gonna happen. I've been handed the torch and now I need to run with it." That's how I look at it. You don't compete with the last person that had the torch. You just say, "Alright, we gotta keep this thing going and keep it alive and just make it as good as you can make it."

Ultimate-Guitar.com: Has that approach worked?

Thal: Of course the fans don't look at it that way. They look at it like suddenly a new addition to the family was brought in without their consent. Or they look at it more like sports teams or superheroes — good versus evil and deciding, "Which is good? Which is evil?"

Ultimate-Guitar.com: What was it like meeting Axl [Rose] the first time?

Thal: I had no preconceived ideas about the guy. You hear lots of things but I've learned the people with the strongest opinions are the ones that have the least experience and that's pretty much with anything. Even when traveling, people that had the harshest opinions about a place were the ones that have never been there as opposed to the ones that have and had a more realistic and not so scathing review. It's the same with people and I found that to be true with Axl as well.

Ultimate-Guitar.com: He wasn't the way people described him?

Thal: The first time I met him, he came down to a rehearsal and we jammed to the song "Riad" and he was yelling in my ear, "This part of the song reminds me of 'Hey Bulldog' from THE BEATLES." I was like, "Yeah, you're right." Eating some burgers and it was just totally normal. That's the thing — anybody's normal and everyone's a human being making music.

Ultimate-Guitar.com: Some are just more normal than others.

Thal: Everyone has their own personalities and own quirks and that's anywhere and anyone in life. I think people tend to build up others into these icons and idols and objects that aren't human. It's not a healthy thing to do but it can be a fun thing to do for a lot of people. But ultimately everyone is just an imperfect, normal human being and that's fine. That's a good thing.