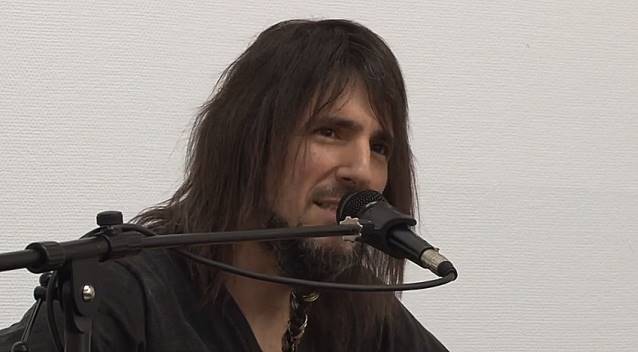 GUNS N' ROSES guitarist Ron "Bumblefoot" Thal held a clinic at the Copenhagen Guitar Show on October 6 in Copenhagen, Denmark. You can now watch video footage of his appearance below.

Thal admitted in a recent interview with the "Totally Driven Radio" podcast that he was not pleased with GUNS N' ROSES' shows consistently starting very late due to singer Axl Rose's tardiness. Although he said "that hasn't happened for a long time," Thal revealed, "I absolutely had the hardest time out of anybody in the band with that stuff… I mean, hell, if I have to wait five minutes longer in a doctor's office, or in traffic or something like that, I'm starting to get annoyed. So imagine, if that's five minutes, imagine two hours. Yeah, I get it; I totally get it. It's not like I don't care, it's just — there's nothing I can do."

Thal continued, "There's been times when I just walked off stage and started throwing a fit on the side… it's not just the waiting, it's the fact that, if you're gonna do that to someone that isn't expecting that and has a babysitter waiting, or you have to be up in four hours for work, or the buses are gonna stop running soon, or whatever it is…"

Thal added, "There's always the fans that are, like, 'Nah, it's a rock concert. They should be three hours late.' Maybe for you, but not for the other 20,000 people… Everyone's got responsibilities. Rent isn't what it was in the '70s. There's a lot more living hand to mouth, and you can't fuck with that."

The guitarist reiterated that the band is doing better with starting its show on time, saying, "I'm really, really happy that we've been going on time, close to on time, sometimes early. And I know the fans are very happy; the people that come to the show are much happier about that."

GUNS N' ROSES does not have any tour dates on its schedule at the moment. The group's last album and first in 15 years, "Chinese Democracy", came out in 2008.