GUNS N' ROSES guitarist Richard Fortus has denied that he ever said the band will begin a world tour in March that will last for at least two years.

Fortus' original comments about GN'R hitting the road supposedly came as part of an interview with TheTelegraph.com to promote his appearance in St. Louis on Monday night (December 29) with PALE DIVINE, a locally popular act, of which he was a founding member, that has not played together for 17 years.

After the TheTelegraph.com article was published and Fortus' comments got picked up by a number of news outlets all around the world, the guitarist issued the following statement:

"OK, it seems that I am being misquoted once again. I never said that GN'R would be playing St. Louis, nor did I say that we will be doing free shows or that we are starting a two-year tour in March! Selective hearing. Never said it."

GUNS N' ROSES' new album, "Chinese Democracy", which came out as a Best Buy exclusive on November 23, currently sits at No. 33 on the Billboard album chart.

The CD has moved 421,000 copies since its release, with the lukewarm response to the record leading many to label it a failure.

Aside from responding to fans' questions on several message boards, lead singer and sole original member Axl Rose has not done any interviews to promote the record. 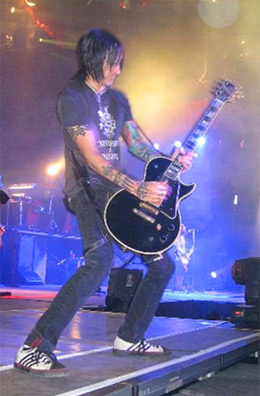