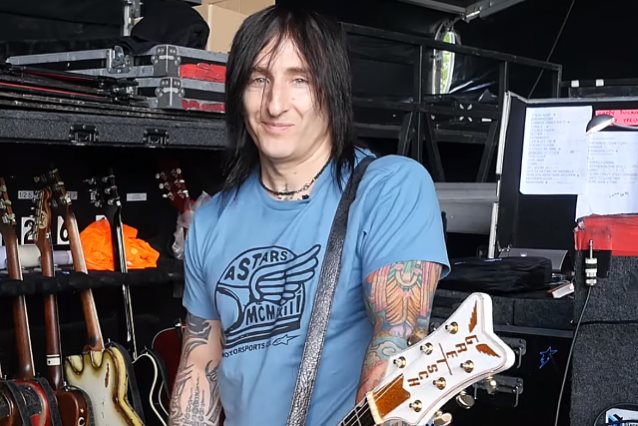 GUNS N' ROSES guitarist Richard Fortus recently gave Germany's Thomann a tour of his gear before a concert on the European leg of the band's "Not In This Lifetime" trek. You can now watch the footage below.

Fortus said in a recent interview that the reunited partial classic lineup of GUNS N' ROSES has begun "assembling ideas" for a new studio album.

Fortus, who joined GUNS N' ROSES in 2001 and became the band's longest-serving post-Slash guitarist, spoke about the possibility of new music from GN'R during an interview with the new "StageLeft" podcast.

He said: "We haven't started recording anything. I mean, when I say that, as far as in the studio, doing an album… We've been recording a lot of stuff, just ideas, sort of assembling ideas, but not going into a studio and actually tracking a new record."

Asked if he thinks a new GN'R album will happen, Fortus said: "Yeah, I do. It's sort of too good not to happen at this point — that's how I feel about it. This band is really a force right now, and I definitely hope that we do, and I think we're all sort of counting on it, and we're also planning on it."

Fortus was also full of praise for GUNS singer Axl Rose, saying that "the genius of Axl is his ability to assemble songs from different parts and make them feel cohesive as a song. And I've never seen anybody able to do that in the same way."

A St. Louis native, Fortus got his big break when his band PALE DIVINE opened for THE PSYCHEDELIC FURS. This led to Fortus forming the band LOVE SPIT LOVE with PSYCHEDELIC FURS frontman Richard Butler and future GN'R drummer Frank Ferrer. In 2000, Fortus and Ferrer became touring members of the reformed PSYCHEDELIC FURS before Fortus hooked up with GUNS N' ROSES. Ferrer himself joined GN'R in 2006.