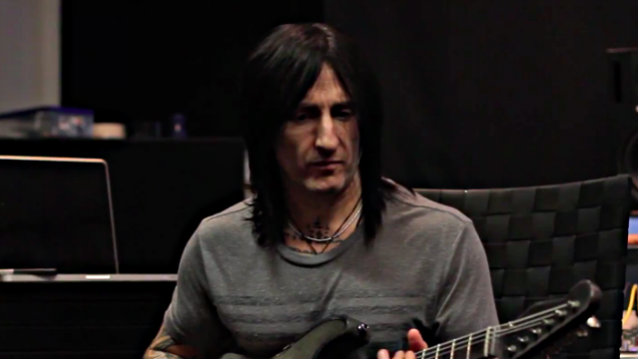 GUNS N' ROSES guitarist Richard Fortus was interviewed on a recent edition of the "Fueled By Death Cast". You can now listen to the chat using the widget below.

Speaking about how GUNS N' ROSES has evolved since he joined the band back in late 2001 or early 2002, Fortus said: "Well, it's morphed through several different incarnations since I've been in it and some pretty big changes. When I came in, I was really drawn to it because originally it was [drummer] Josh Freese and [basist] Tommy Stinson and [guitarists] Robin Finck and Buckethead… I wasn't that familiar with Buckethead, but also Brain [drummer Bryan Mantia] came in. And those were all guys that I had worked with before and was really excited to play with. I was a huge REPLACEMENTS fan and, obviously, a big [NINE INCH] NAILS fan. So working with those guys was really intriguing to me. I wasn't that familiar with… I mean, obviously I knew GUNS N' ROSES and I knew 'Appetite [For Destruction]' and I knew all the big hits, but I never really owned a record; it just wasn't my genre. [But] it makes total sense, 'cause they were… GUNS N' ROSES really was separated from that L.A. hair-metal scene, which is who I sort of lumped them in with initially, but once you get into it, you realize it's much more akin to classic rock and punk rock. So it makes perfect sense that I would relate to it. Once I got into it, it fit really well for me, because that's my background — equal parts BLACK FLAG and ROLLING STONES."

Fortus also talked about how a partial reunion of GUNS N' ROSES' classic lineup came together in 2015 after guitarist Slash and singer Axl Rose re-established contact after many years of not speaking to each other. "It sort of creeped up, and it sort of all happened very organically," he said. "We didn't have a bass player — Tommy had left to go do [THE REPLACEMENTS] stuff — and we didn't have another guitar player. And we said, 'Well, we know a couple of guys,' and it just sort of happened in that way… And Duff [McKagan, GUNS N' ROSES bassist] and I knew each other. I don't know how much Slash was familiar with me or with [drummer] Frank [Ferrer], but we all got together and sort of felt out how it would be and how it was to play with each other, and it really… You know, some things click, some things don't. And the three of us [Duff, Slash and I] definitely clicked… I think we all agree it clicked instantly. And Frank maybe took a little bit for them to get used to playing with him, 'cause he's a different drummer than Matt [Sorum], who they'd been playing with. But it really just seems to come together well, and everybody's pretty psyched about it."

The GUNS N' ROSES "Not In This Lifetime" tour has now reached a staggering overall gross of $230 million since launching a year ago in April 2016, according to Billboard.

That figure includes a $38 million haul from eight concerts in Australia and New Zealand, but does not yet account for earnings from seven Asian markets that the band visited during the first quarter of 2017.

The band, with this same lineup, will come back to North America for at least another 15 stadium dates this summer, starting on July 27 in St. Louis and ending on September 8 in San Antonio.