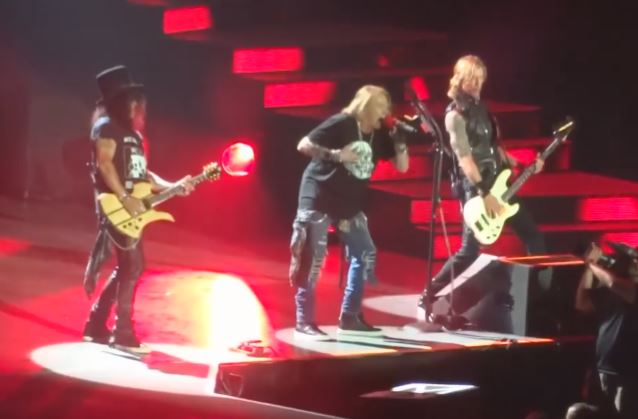 GUNS N' ROSES Kicks Off 'Not In This Lifetime' Tour In Detroit; Video, Photos

GUNS N' ROSES kicked off its "Not In This Lifetime" tour Thursday night (June 23) at Detroit, Michigan's Ford Field. 41,000 fans packed the stadium to watch the band play a two-hour-and-35-minute show that started just before 9:45 p.m.

Singer Axl Rose reportedly sported six different T-shirts, a leather jacket, five hats and a couple of bandanas during the night, which saw him leaning on guitarist Slash's shoulder during Bob Dylan's "Knockin' On Heaven's Door".

For the Detroit gig, Rose was no longer confined to the chair he had been seated on ever since breaking his foot during a surprise GUNS club show in April 1 in Los Angeles.

Check out fan-filmed video footage and photos below.

Footage was released on June 18 of former GUNS drummer Steven Adler practicing "Paradise City", leading to speculation that he would at least make a guest appearance on the band's reunion tour.

According to some reports, Adler was actually going to perform with GUNS N' ROSES on April 1, but was unable to play due to a back injury.

GUNS N' ROSES played its first show since reuniting at Hollywood's Troubadour nightclub, where the band began its career more than 30 years ago. The group also played two shows at the new T-Mobile Arena in Las Vegas before doing two stints at Coachella and two Mexico City gigs.

Rose just finished a stint as lead vocalist for AC/DC on that band's European festival run, and is slated to play at least ten North American shows with that group right after GUNS complete their stadium run.

Wow. Alice In Chains and Guns & Roses was great! GnR played for over three hours! This is my favorite shot from tonight--Axl and Slash. #GunsAndRoses #Slash #appetitefordestruction