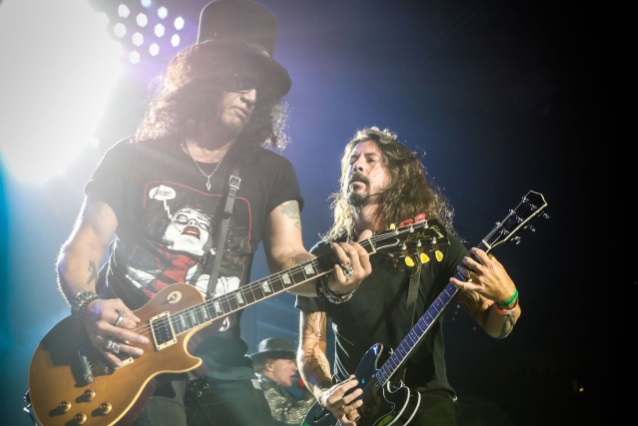 According to Billboard, a video of Dave Grohl performing "Paradise City" with GUNS N' ROSES in Tulsa, Oklahoma landed at No. 1 on Top Facebook Live Videos chart for November 2017. The clip, which was uploaded on November 15, was the most-reacted-to, most-shared and most-viewed video by a musical act last month, earning 100,000 reactions, 25,000 shares and 2.1 million views, according to Shareablee.

The Top Facebook Live Videos chart is a monthly look at the widest-reaching and most-reacted-to videos posted by musicians on Facebook Live, as tracked by media analytics company Shareablee. Rankings are determined by a formula that blends reactions, comments, shares and first-seven-days views.

GUNS N' ROSES had two more videos in the Top 10: a performance of "Patience" with Billy Gibbons of ZZ TOP in Houston, Texas, which landed at No. 8; and a rendition of "Paradise City" from the final show of GN'R's most recent leg of the "Not In This Lifetime" tour in Los Angeles, which came in at No. 9.

GUNS N' ROSES concluded its 18-month "Not In This Lifetime" reunion tour with a nearly four-hour, 37-song concert at the Forum in the band's hometown of Los Angeles on November 29. The set featured relatively rare performances of two tracks from the 2008 "Chinese Democracy" album, "Catcher In The Rye" and "Sorry", in addition to tributes to Glen Campbell, Malcolm Young and Chris Cornell in the form of "Wichita Lineman", "Whole Lotta Rosie" and "Black Hole Sun".

GUNS N' ROSES will return next June for a seven-week European jaunt, but the band's plans until then, and beyond that, remain unknown for now. The three original members have not given a single interview together.

The reunited trio, along with four backing musicians from latter lineups, have been on the road almost continuously since the tour was launched with a surprise show at the Troubadour nightclub in Los Angeles on April 1, 2016.