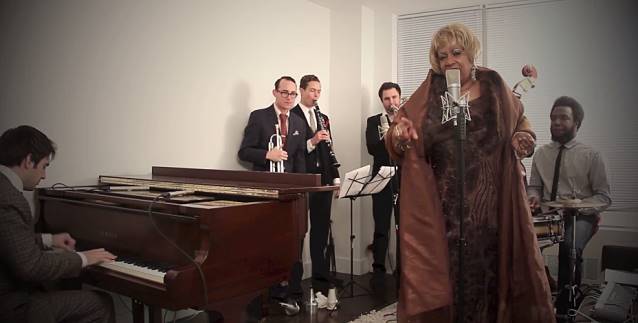 "POSTMODERN JUKEBOX actually originated as a musical concept created by our bandleader/pianist Scott Bradlee," lead singer Robyn Adele Anderson told Pipe Dream last year. "He came up with the term some years ago when he first started covering songs in different genres. I loved the idea but didn't get involved until February of [2013] when Scott first asked me to be in a video (our vintage 'Thrift Shop' cover) and we've continued to make videos together ever since."

She added: "The creative process of these videos is actually pretty simple. First Scott and I pick a song that we think would be popular (either a song everyone loves or everyone hates). Scott then creates a musical arrangement, while I create or alter the melody (especially if it's a rap song). Then we all get together in Scott's apartment, run it a few times, and then film it!"

On February 11, 2013, POSTMODERN JUKEBOX posted "Thrift Shop (Vintage 'Grandpa Style' Macklemore Cover)", which was then picked up by Reddit. Today, the video has more than four million views. Other videos they've posted include covers of Ke$ha, Justin Bieber and SWEDISH HOUSE MAFIA songs.