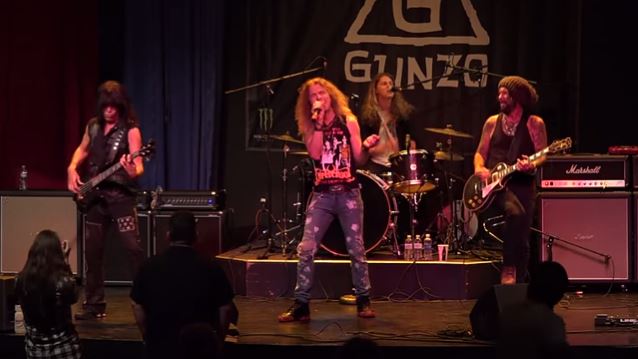 Victor A. Nieto has uploaded video footage of GUNZO performing the MONTROSE classics "Bad Moter Scooter" and "Rock Candy" on June 15 at Ramona Mainstage in Ramona, California. Check out the clip below.

In recent interview with the "Another FN Podcast With Izzy Presley", Guns stated about GUNZO, "We're actually gonna start writing brand new music, which is something I wasn't really that looking forward to doing that with anybody. I just finished a record with DEVIL CITY ANGELS [the band Tracii formed with drummer Rikki Rockett (POISON), bassist Eric Brittingham (CINDERELLA), and vocalist/rhythm guitarist Brandon Gibbs (CHEAP THRILL)], and it's a really good middle-of-the-road rock record. But playing with Rudy and Shane and Keith has really inspired me to write some kind of neoclassical metal. So that's what I'm doing right now. Any spare minute I have right now, I've got a guitar in my hand and I'm trying to come up with really nice pieces of music and kind of take it from there. And everybody in the group and anybody that's involved with us, there's a lot of genuine enthusiasm to see this thing grow and do something meaningful in the future here."

Guns also talked in more detail about the kind of music fans can expect to hear from GUNZO's live shows and upcoming record release. He said: "Keith was in MONTROSE, on and off, for a lot of years. So [when we play out] we're doing a couple of MONTROSE songs, we do WHITESNAKE stuff, DIO stuff, OZZY [OSBOURNE]… Eventually we'll be doing more QUIET RIOT stuff. We did 'Killer Girls', which is a QUIET RIOT song that Randy Rhoads wrote; it was on their second record with Randy Rhoads — a very old song. So we're trying to, right now, celebrate all this great stuff we've done over the years, and in doing so, our setlist is unbelievable — from 'Rainbow In The Dark' to 'Crazy Train', 'Never Enough'…. Just great stuff. So anything that we will write and put out in the future will be that vein of music, which is something that I haven't had any interest in writing in years. But this is the perfect vehicle to do that."

He continued: "When I say 'neoclassical,' I really mean it. I'm writing some really, kind of…. for lack of a better expression, kind of soundtracky classical music that I have been writing for other projects, 'cause I also try to weasel my way into movies and television and stuff like that, so I have a lot of different kind of stuff kind of on the backburner that I can draw from, and, if nothing else, it inspires me to write stuff specifically for this."

Tracii added: "The plan is to not ever really play [any new songs with GUNZO] until it's out. We're very aware that when you go to see a band like this, people wanna hear hit after hit after hit after hit; we don't really wanna have to have anybody sit through a six-minute brand new song that they've never heard before live. And sometimes live isn't the best place to do every type of music. I mean, it's great to present straight-up rock and roll live, because it's immediate, but I think what we're gonna be writing isn't gonna be exactly immediate."