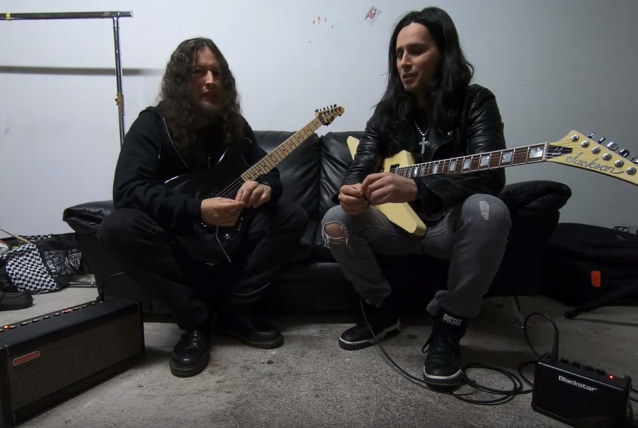 Greek guitar virtuoso Gus G., well known in rock and metal circles for his work as Ozzy Osbourne's guitarist and as leader of his own band FIREWIND, has uploaded a new video in which he can be seen "hanging" with founding QUEENSRŸCHE axeman Michael Wilton.

Gus says in the video's captions: "This is a test video which hopefully can become a regular thing in the future if you guys dig it. Guitar Hangs is about hanging with other fellow guitarists and talk about gear, their influences, how they approach writing, show us some licks of theirs, etc. Let us know in the comments if you like this idea and who else you'd like to see me hang out with!

"On this video I'm hanging with @Queensrÿche legendary guitarist Michael Wilton. Many thanks to @Todd La Torre for helping me film this using his GoPro cams."

"The Verdict" marks QUEENSRŸCHE's third full-length release with La Torre, following the departure of Tate in 2012.