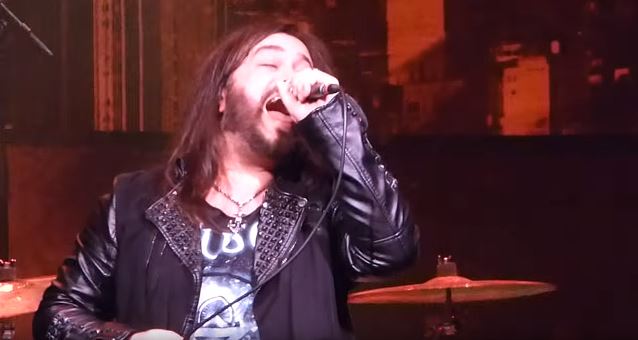 FIREWIND, the band led by Greek guitar virtuoso Gus G., well known in rock and metal circles for his work as Ozzy Osbourne's guitarist, has announced the addition of singer Henning Basse (METALIUM, SONS OF SEASONS) to the group's ranks. Basse previously toured with FIREWIND on various continents in 2007 and was most recently the singer in Gus's solo touring band.

Basse will front FIREWIND for the band's upcoming performances on the 70000 Tons Of Metal cruise and next year's Graspop Metal Meeting festival in Belgium.

Says FIREWIND in a statement: "Since last year, [Henning] started playing some shows with Gus G.'s solo band and he delivered amazing performances, stunning the crowds all over Europe! Henning is an amazing frontman and a personality that totally fits with what FIREWIND is all about."

BREAKING THE SILENCE!!Today we're happy to announce our new singer! And it's none other than Henning Basse! Some of you might know him from his work in Metalium, others might have also seen him on stage with us. Henning is no stranger to Firewind fans as he toured the world with us back in 2007! Since last year he started playing some shows w/ Gus G's solo band and he delivered amazing performances, stunning the crowds all over Europe! Henning is an amazing frontman & a personality that totally fits with what Firewind is all about. Please welcome Henning to the family, we promise you the upcoming shows will Rock harder than ever!!