There are exactly ZERO cases of COVID-19 in the freezing cold arctic tundra of Antarctica. This is great news as your Lords and Masters GWAR have been cleared for travel.

Unfortunately, during this time of quarantine, the members of GWAR have also found themselves running precariously low on magic talent dust (drugs),toilet paper, and money. But don't worry your hideous little heads, as your Scumdog overlords have a plan to replenish their stash and entertain the faithful legions of Bohabs at the same time!

On Saturday, October 10, GWAR will return to the flaming remnants of Richmond, Virginia for a special drive-in show. The concert is set to take place at The Diamond, located at 3001 N. Arthur Ashe Blvd. This is a drive-in show with social distancing measures in effect. Lots for the show will open up at 8:30 p.m. local time and the show starts at 9:45 p.m. local time. Tickets go on sale this Friday September 11 at 10:00 a.m. EST. Tickets can be purchased here.

Blothar The Berserker had this to say: "Denizens of Richmond, Virginia! Americans do everything in their cars, and now that will include watching the greatest rock and roll horror show on this or any other planet! Truly, what is October without a global pandemic and the chance to watch GWAR from the comfort of your shitty old hoopty?! Grab a hotdog, slather it in chili, and shove it down your throat as we bring you the pinnacle of entertainment, the ultimate creature feature, live and writhing...all over your windshield!"

On October 30, GWAR will release a 30th-anniversary version of the band's career-defining album "Scumdogs Of The Universe". It will be available on CD, double LP, cassette and digital and is available for pre-order here.

Since GWAR's formation, the band has released fourteen studio albums, two live albums, numerous music videos and have sold over 800,000 records in the United States alone. Known for its outrageous violence and sexual humor often incorporating social and political satire, GWAR has attracted acclaim and controversy for both their music and live performances. 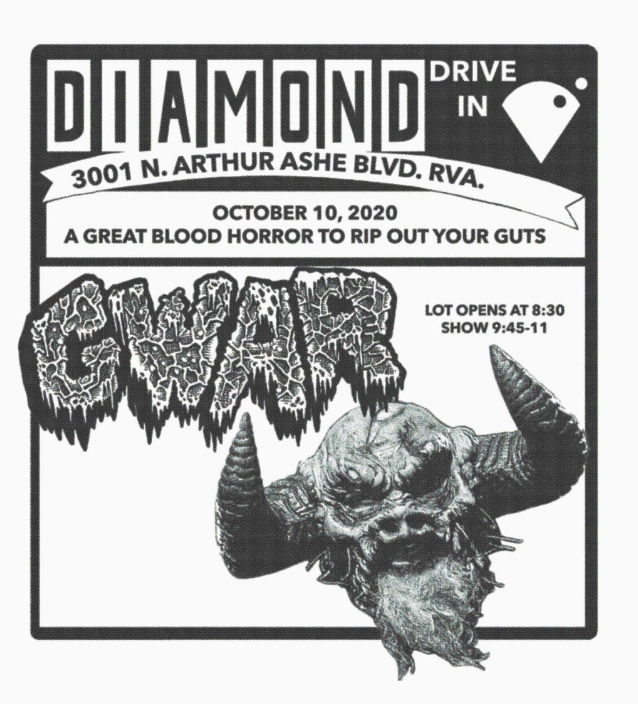