Following up on an incredibly successful Kickstarter campaign late last year, GWAR will bring the blasphemous, blood-soaked series that fans demanded to print in June, courtesy of Dynamite Entertainment.

GWAR has released an official video announcing the Dynamite partnership, which can be viewed below.

From the depths of outer space to the frozen wasteland of Antarctica, punk rock and heavy metal's most shocking band of intergalactic blood-spewing alien monsters has returned to kill everything and respect nothing in the pages of GWAR: Orgasmageddon! Banished to the past by the cold and calculating Mr. Perfect, the heroes of GWAR trample through time like a deranged Bill & Ted on bath salts. Antics ensue as they stomp and smash and shape human history to what we accept as our current reality. Co-written by GWAR themselves and Matt Miner (Toe Tag Riot, Critical Hit),and featuring art by Jonathan Brandon Sawyer (Welcome Back, Critical Hit),GWAR: Orgasmageddon is a love letter to comics, grindhouse movies, and heavy metal, sure to appeal both to the most die-hard fan and the comics fanboy/fangirl intrigued by the prospect of social awareness drowned in geysers of blood and alien jizz.

"It's awesome to have a comic coming out!" says Matt Maguire, better known in the band lineup as Sawborg Destructo. "When Matt Miner and I first talked, everything clicked and I knew we were going to do a cool project. We can't wait to show all of the amazing work that is being generated for this comic! With Dynamite in our corner, it's gonna be a big book!"

Regarding what GWAR fans will love most about the series, Maguire adds, "The blood... maybe the story... but mostly the blood. Oh, did we mention that Slymenstra Hymen is gonna be in it? And oh yeah — blood!"

"I always wanted to be the guy to help bring GWAR to modern-day comics," says Miner. "Most people when they get into comics want to do Batman or Spider-Man or write the next great Punisher story, but I really, really wanted to write my favorite scumdogs of the universe... the all-mighty GWAR! Although working on that other stuff would be cool, too."

Regarding the concept and audience for the new series, Miner says, "People who love fun comics are gonna dig this crazy story that dives into the past and shows how GWAR not only created humans, but shaped our history to what we now know as our actual modern-day reality. GWAR fans are going to love that all the creators on the book are fans — every single one, from me and artist Jonathan Brandon Sawyer, all the way to every single variant cover artist — and GWAR themselves are contributing art and co-writing the book, to boot. This isn't a case of us getting the license and then running with it; we collaborate very closely with the band and are in almost constant contact during the creation. Fans of comics with a deeper meaning may have to dig through the blood, the guts, and the sometimes off-color jokes, but they're gonna find what they're looking for; GWAR has always been a mirror held up to the worst aspects of humanity, so that social satire and consciousness is there, although it may be splattered with politician brains and alien bile. You do not need to be a GWAR fan to have a ton of fun with this comic!"

"Anyone who is familiar with GWAR's theatrical performances, and over their thirty-year history will agree that it is hard to think of a band better suited to the comic book page," says Dynamite CEO and publisher, Nick Barrucci. "It seems only fitting that these masters of gore find their published home alongside the comic book adventures of the original shock rockers, KISS!"

GWAR: Orgasmageddon #1 will be solicited in Diamond Comic Distributors' April 2017 Previews catalog, the premier source of merchandise for the comic book specialty market, and slated for release in June. Comic book fans are encouraged to reserve copies of GWAR with their local comic book retailers. GWAR: Orgasmageddon will also be available for individual customer purchase through digital platforms courtesy of Comixology, Dynamite Digital, iVerse and Dark Horse Digital.

Miner has written a post explaining the comic book pre-order system and why it's so important if we want more GWAR comics in the future.

The comic's creators have also provided a pre-order slip to make reserving copies with your local comic shop easy, and the band asks their fans to please call their local comic stores and both pre-order copies of the comic and request the store stocks GWAR comics for their shelves. 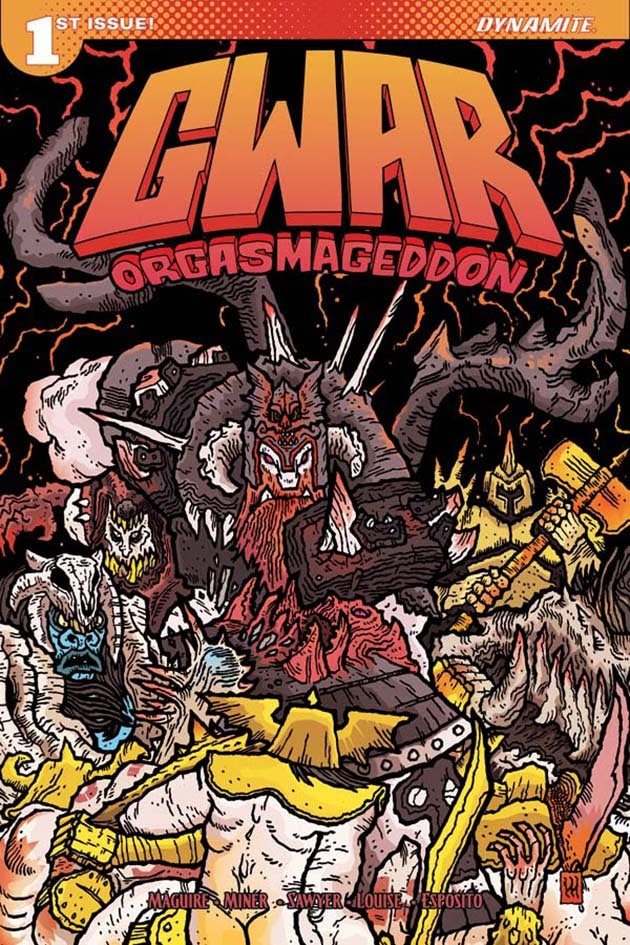 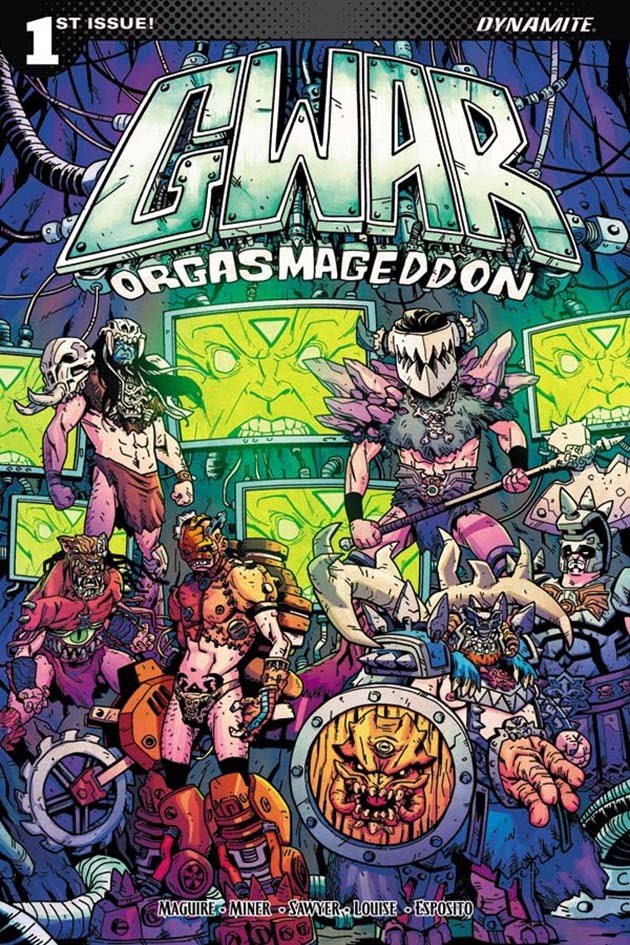 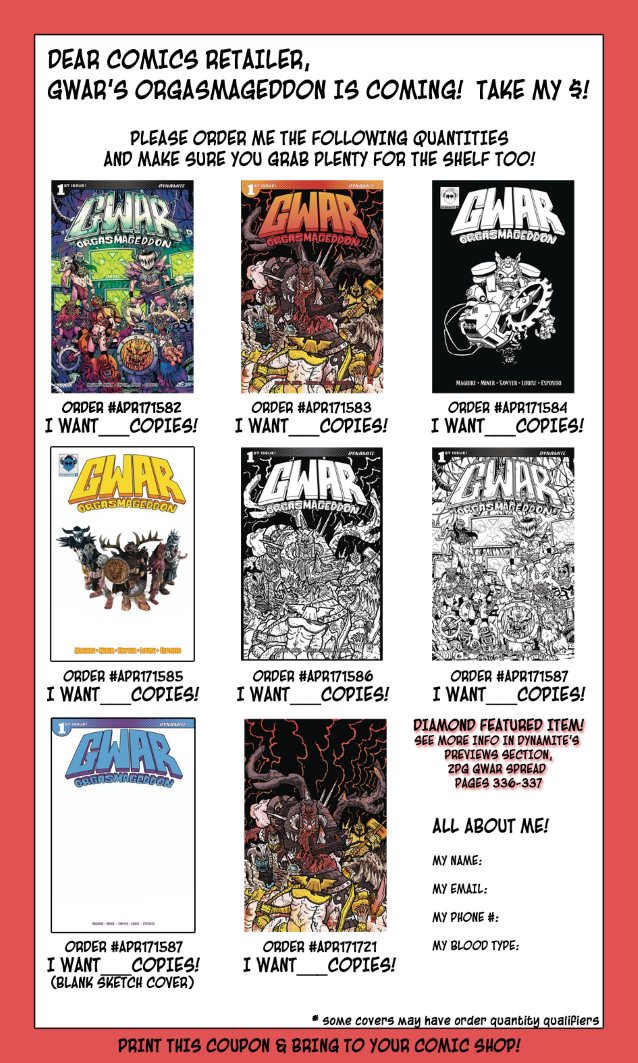