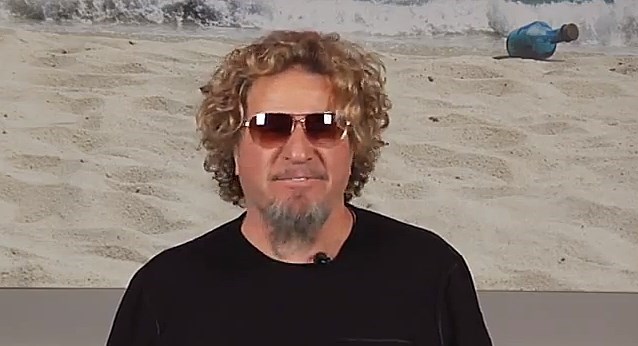 Peter Hodgson of Gibson.com recently conducted an interview with Sammy Hagar (CHICKENFOOT, VAN HALEN). An excerpt from the chat follows below.

Gibson.com: I've always wanted to ask you how you rank yourself as a guitarist. It takes balls to stand up there with Eddie Van Halen or Joe Satriani. I've been lucky to jam with Satriani and Vai, and to a certain point it's intimidating but also at a certain point you've just got to tell yourself "Screw it, this is what I do."

Sammy: I'm a little bit intimidated if we go too long, but in CHICKENFOOT and VAN HALEN, I just put the guitar on and got a big cheer always, and then I'd burn for a little bit and then take it back off before I ran out of chops, y'know? I rate myself as a guy that can play, and I can express myself extremely well but only in one language. I can only play blues-based guitar. And when a guy like Joe steps up there, he can play. Once he finishes with my repertoire, he can go into French, Spanish and Russian on the guitar! He's just so versatile and fluent. Eddie's not as fluent and versatile. Eddie's got a style for himself and he's very much in that pocket, but Joe can play anything. He freaks me out. When Joe and I start to write together, he'll show me some chords and I'll start singing, then I'll pick up a guitar just mainly to figure a lick out: "What chord is that? What are you playing?" so I can know what notes I have to choose from to sing. Then he'll go "That was a cool lick, what did you play?" and I'll go "[Expletive], I don't know!" I don't get it. I just play.

Gibson.com: There were so many great guitar players to come out of the '80s where you knew they'd kind of fade away, but even early on it was apparent that we'd still be hearing about Joe Satriani in 40, 50 years.

Sammy: Oh, Joe's here to stay. I think he's going to have a kind of Jeff Beck career. He's going to have these little windows where he gets a little bump, a little more publicity, a little more recognition, and then he kinda just cruises along, then all of a sudden somebody's gonna say, "Wow, Joe Satriani's the best guitar player in the world" and everybody gets hip again. He ain't going nowhere. The thing that amazes me the most about Joe's guitar playing over any other musician is he knows exactly what he's playing and he can play it twice, three times exactly the same. He works his parts out but he does it really quick. It's not like it takes him forever to come up with a part. He comes up with it, BAM, instantly, and he knows every note he's playing and I don't know how he does it. He's too smart for his own good. But you're a lucky man if you stood up and played next to Joe Satriani. What I do is, I learn. He immediately makes me better because it makes me aware of what I'm playing, because if I see him solo I think, "I don't know what I'm doing." So I start to think a little more, like "Oh I know why that note works." So he just enlightens. He's enlightening to play with. I don't know if that works for you, but that's how it works for me.

Read the entire interview at Gibson.com.