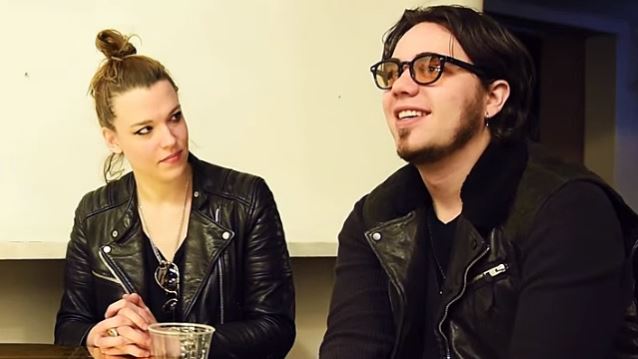 HALESTORM's Josh Smith has finally confirmed the long-standing rumor that the band's frontwoman Lzzy Hale and HALESTORM guitarist Joe Hottinger have been involved in a romantic relationship. Asked by Tommy Carroll of the 103.9 The Bear radio station in South Bend, Indiana if it's true that Lzzy and Joe are "an item," Smith responded (see video below): "It's quite possible. It's on and off. Right now, I think it's off. That's all I'm gonna say."

The bassist continued: "They're pretty open about their relationship. They don't talk about it openly, but, you know… At the end of the day, we're all like family, and that's more or less the road we take is… You know… Whatever the case may be relationship-wise, it's not gonna break up our band, and that's the… I guess, the big thing is the band is the marriage here."

Lzzy was asked in an interview earlier this year if she finds it difficult to maintain a relationship while on the road. Hale replied: "In a relationship, you have to literally have everything out there to this other person, and they have to do the same thing with you, or it's not gonna work. I've never been a jealous person either, and as of right now, I'm dating someone who is the same way. So we have a very amazing trust thing going on."