HALESTORM's previously announced European "An Evening With Halestorm" European tour has been canceled. The trek was scheduled to kick off on February 1 in Frankfurt, Germany and run through March 13 in London, United Kingdom.

Earlier today, HALESTORM released the following statement: "We've got good news and we've got bad news. Due to the different restrictions in all of the countries we were planning on traveling to, it is logistically impossible to bring our Evening With Tour to mainland Europe this February. These shows have been canceled. Check your inbox for refund information or at point of purchase. The Good News is that we are still planning on coming to the UK + Ireland.

"We hope all of our European Freaks understand that this was out of our control and we are looking forward to announcing shows soon!"

Earlier in December, HALESTORM frontwoman Lzzy Hale told Brandy Richey of Pittsburgh's 105.9 The X radio station about the band's upcoming LP: "During the time that we were writing it, I got a lot of inspiration by just the stories and just people living their lives and survival stories and literally just conversations that I've had with these people. So, in turn, I feel like even just as an artist, it was a really neat way for me to find myself again and see myself in them, but also in turn I feel like everyone's going to see some of themselves on this album. So, yeah, it's a beautiful thing."

Check your inbox for refund information or at point of purchase.
The Good News is that we are still planning on coming to the UK + Ireland.
We hope all of our European Freaks understand that this was out of our control and we are looking forward to announcing shows soon! 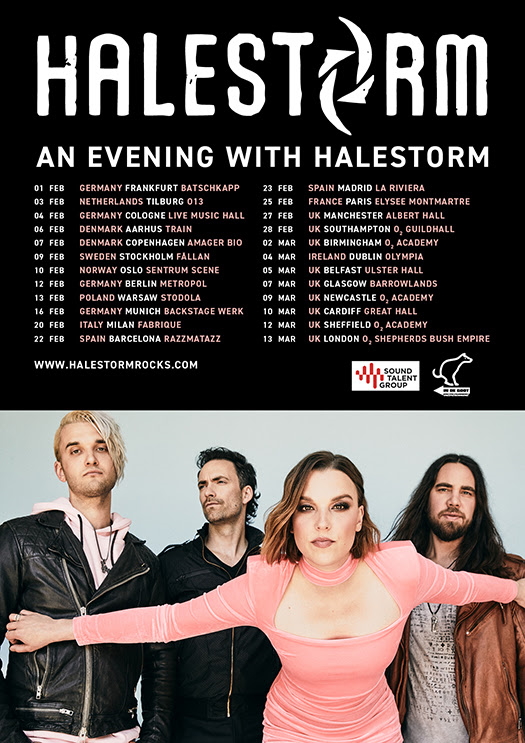