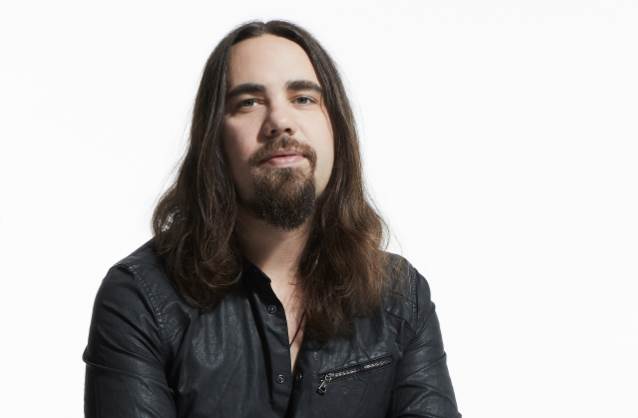 Guitarist Joe Hottinger has told The Aquarian Weekly that HALESTORM "didn't want to sound like anything else" on its latest album, "Vicious". "There is not much that is inspiring us right now," he said. "There are a few things here and there in all sorts of genres. But, in our genre in particular, some artists… I won't say they've given up on rock; however, they're incorporating different sounds as an experiment. Maybe that's just what they're into, which is fine. I'm all for experimentation — that's what we were doing, too — but we wanted to make sure that our experimenting was in the realm of hard rock or rock and roll in general… big guitar, you know?

"We were recording with [producer] Nick [Raskulinecz], and he knows how to record drums and guitars," he continued. "That's becoming a bit of a lost art form these days. And, I get it, man. We're in the middle of a conversation — Lzzy [Hale, HALESTORM frontwoman], some of my rock 'n' roll friends and I — about listening to new music. I listen to new music when it comes out every Friday, especially hard rock or metal on Apple Music or Spotify, and some of it, maybe it could be a good song or a good band, but it sounds terrible. It's really bad, a lot of it. You can't blame them. To record drums properly, the production is expensive. It's no joke, and you've got to know what you're doing. And then you look at alternative music or hip-hop or even pop — you could just spend two-hundred dollars on some software, and it sounds perfect. You just put it in the computer and barely have to mix it. It sounds amazing. You've got the right samples and all this stuff. Whereas if you're just some kid in a rock band in a garage — like we were — we didn't know how to record. I mean, we're still learning, and we've got way better at it. Obviously, we use a team — engineers, Nick, our producer, the mixer, the mastering and everything that goes into it.

"There aren't many rock records out there today that just sound amazing," Joe added. "I think that's pushing a lot of people away. But I think, also, there's a whole history of rock 'n' roll that does sound amazing. You get a kid like GRETA VAN FLEET coming up, and they get it. It sounds good. But, even with that, you've got to turn it up, crank it. It's not meant for little headphones. You want to hear the room and the vibe of the band… I don't know. There's no conclusion to this, it's just something that has been an ongoing conversation trying to figure out why more kids aren't doing rock 'n' roll. I think it's the entry level… you've got a computer, and it sounds amazing. You can show your friends, 'Check this out!' But, to be in a band, that's tough… that's work."

HALESTORM's fourth album, "Vicious" was released on July 27 via Atlantic. The disc was recorded last year at Nashville, Tennesse's Rock Falcon studio with Nick Raskulinecz,
an acclaimed producer who has previously worked with RUSH, KORN, ALICE IN CHAINS and DEFTONES, in addition to having produced HALESTORM's third covers EP, "ReAniMate 3.0: The CoVeRs eP", which came out in January 2017.