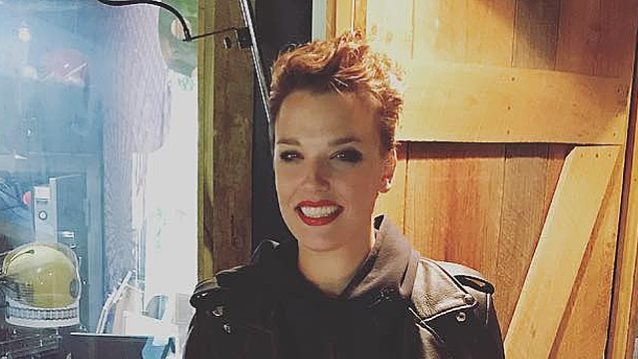 HALESTORM In The Studio For Fourth Album: Video, Photos

HALESTORM has entered the Dark Horse Recording studios just outside Nashville to begin recording its fourth album for an early 2018 release. Helming the sessions is Nick Raskulinecz, an acclaimed producer who has previously worked with RUSH, KORN, ALICE IN CHAINS and DEFTONES, in addition to having produced HALESTORM's third covers EP, "ReAniMate 3.0: The CoVeRs eP", which came out in January.

A short video clip from the studio, as well as a few photos, can be seen below.

HALESTORM frontwoman Lzzy Hale recently told of the Razor 94.7 radio station about the progress of the songwriting and recording sessions for the band's follow-up to 2015's "Into The Wild Life" album: "We picked a producer before we had any songs written. And he basically said, 'Hey, I have this studio and I have this pre-pro budget situation and I wanna do the record with you guys, so let's start.' So we started literally from scratch — like [with] no real ideas — and ended up doing a bunch of instrumentals with him, and then I'd take it home and write over them. And, yeah, it's been a lot of fun."