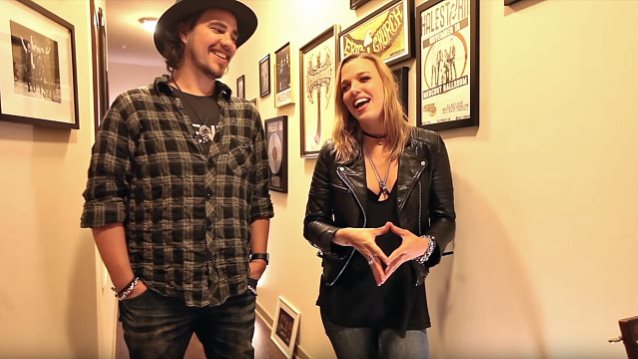 HALESTORM Is Beginning To Formulate Ideas For Next Album

Speaking about HALESTORM's plans for the immediate future, Joe said: "We're starting to formulate in our brains right now what we're gonna do for the next record and starting to get ours heads in that space. And it's gonna be a fun one." Lzzy added: "We've been writing a lot lately and just trying to figure out what we're gonna do next, record-wise."

Lzzy said in an interview that the band didn't set out to make a lighter album with its latest effort, "Into The Wild Life" — even though it worked out that way. Hale explained to May The Rock Be With You: "When we were talking about making songs heavier, it didn't necessarily mean stacks of Mesa Boogies and a lot of crunch and layers and walls of guitars." Hale added that the band followed only two rules while recording: "We're not going to record the record in the same way that we did the last two, and is it good or not?"

"Into The Wild Life" debuted at No. 5 on The Billboard 200 album chart, selling 56,000 copies in its first week of release — more than double the first week haul of the band's previous effort, 2012's Grammy-winning "The Strange Case Of…"