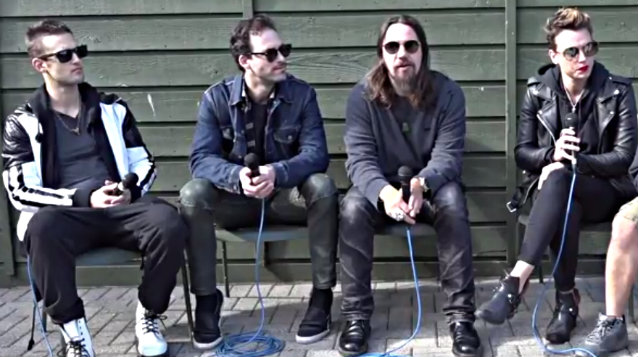 Speaking to Meltdown of the WRIF radio station at the first-ever Riff Fest, which was held September 29 at DTE Energy Music Theatre in Clarkston, Michigan, HALESTORM guitarist Joe Hottinger said about the follow-up to 2015's "Into The Wild Life": "We've got a few songs started, a few finished, and… I don't know. We're touring now."

Added drummer Arejay Hale: "We're gonna wrap up the rest of it when we finish the tour. We're just gonna go right back in the studio and keep going until it's done."

Calling Nick Raskulinecz "a rock dude" who is "a fan of not just of ours but just rock in general," Lzzy said about the making of the new HALESTORM record: "It's kind of a never-ending process; that's usually the way it goes. Nothing is really done until we've reached that deadline that we can go no more. [Laughs] And then we're gonna have to live with it. [Laughs]"

Arejay added: "All of us have our laptops out on tour. Every day we're all still trying to write new stuff, so when we go back in, we'll have some new ideas.

"And a couple of songs we actually wrote… We went right in the studio and just wrote it from the ground up. Those are a lot of fun too."