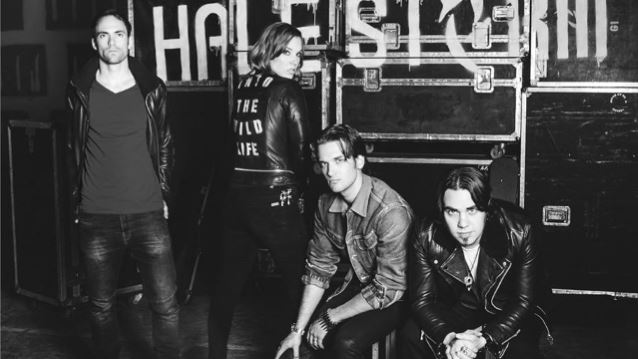 "Mayhem", a brand new song from HALESTORM, can be streamed in the YouTube clip below. The track is taken from the band's upcoming album, "Into The Wild Life", which is due out on April 14.

She said, "We decided to throw away everything that the previous two records made us feel comfortable and safe. We threw caution to the wind and said, 'We're just gonna chase after whatever gets us excited.' And we made an actual album."

The band recorded the set in Nashville — where Hale says it was "isolated" with few distractions — aside from "the occasional beer run."

The new album, comes on heels of HALESTORM's Grammy-winning 2012 sophomore release, "The Strange Case Of…"

Around that time Hale told The Pulse Of Radio that the writing process for "The Strange Case Of…" was split in two distinct halves. "We went into it right off the road, so the first half of the record that we wrote was very — we were writing some of the most aggressive songs that we've ever written, I'm screaming my head off, you know," she said. "And then halfway through, started writing some of the most personal songs that, you know, we've ever written, and some things that I've never talked about before, and it's interesting — there's two definite sides and very real sides to what we do and who I am."

HALESTORM has been touring with Eric Church and will hit the road with THE PRETTY RECKLESS in April.