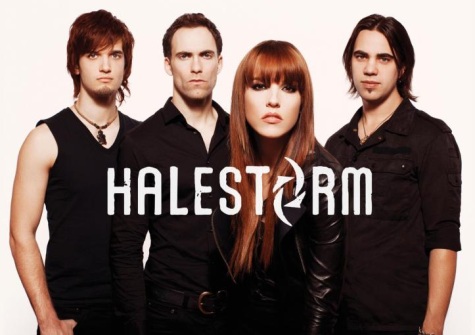 Matt Bahan of the Peoria, Illinois radio station 105.7 The X conducted an interview with HALESTORM singer Lzzy Hale on July 7 at the Twisted Spoke Saloon in Tremont, Illinois. You can now watch the chat below.

Lzzy recently told Black Velvet magazine that more and more women are turning up at rock shows. She explained, "These girls that we see need to be there and some of them cry and they're screaming every word and there's such passion that I see. They're definitely making a statement of independence as well by going to these shows, 'cause it's not something you just go to with your girlfriends, you know, have a few drinks, or not if you're underage, but it's definitely a different breed of girl."

Regarding the inspiration for the HALESTORM song "Rock Show", Lzzy said, "'Rock Show' was inspired by a little girl we know in the States. She's a 13-year-old little guitar player and she wrote me this letter. It's a beautiful letter about the first time she came to our show and it was her first show and then she got her a guitar and long story short, she's got a little band now and she can play Eddie Van Halen's 'Eruption'. It's amazing what she's been able to accomplish in the last couple of years, but she wrote me this letter about how much just going to that show changes the course of her life and inspired her to carve out her own path for herself and have the confidence to do so."

HALESTORM made history with its electrifying new single, "Love Bites (So Do I)". The track — featured on the Pennsylvania-based band's breakthrough new album, "The Strange Case Of…" — has ascended to No. 1 at Active Rock radio outlets nationwide, marking the first ever female-fronted group to top the format's airplay ranking.