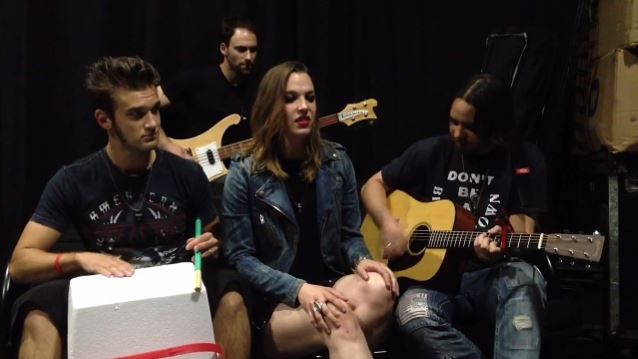 As a "thank you" to the band’s fans for pushing them past one million "likes" on Facebook, Pennsylvanian rockers HALESTORM — who are now based in Nashville, Tennessee — have posted a video performance of the previously unreleased song "Sweet Love". The track, which was first performed by HALESTORM's Lzzy Hale and Joe Hottinger on July 26 as part of their acoustic show at The Basement in Nashville, Tennessee, was written in 2011 with WEEZER frontman Rivers Cuomo during the sessions for HALESTORM's "The Strange Case Of…" album.

In a May 2012 interview with a Syracuse radio station, Lzzy said working with with Rivers Cuomo on "Sweet Love" was her "favorite collaboration." She explained: "He's the sweetest guy. He's a little nuts. He stopped for an hour for him to meditate. I'll do something again with him."

Hale has told Loudwire in a recent interview that HALESTORM is "almost done" with recording its third album. Hale explained, "We have a lot of really great songs. I think we finally cracked the code for this next record… That's what I love about writing records, you don't really know what you want to say on a record when you begin writing it. At least we don't. It's always halfway through the process and then all of a sudden, the light bulb goes off and the floodgates open."

Asked if "Mayhem" is a good indicator of what HALESTORM fans can expect to hear on the band's next album, Hale said: "Definitely. Especially since that one was the one that we felt like it needed a little bit of work, and we weren't really considering it one of our best songs. So we wanted to see how we could develop it on tour, and I think that the crowd has really gotten us excited about it now. So it might actually have a shot at being on the record." Drummer Arejay Hale added: "It definitely will help the writing process for the rest of the songs. Now we have an idea of, kind of, how the crowd reacts to certain things. So it kind ofgives you a good guideline, I guess."

Hale added that fans might hear some more personal material on this record, saying, "I think that when our fans began to kind of let me into their lives a little bit, they made me feel so incredibly comfortable in my own skin that they're going to be hearing some stories on this record that they might not know about me."

Hale also said that the band wants to "bridge the gap" between its live show and its recorded sound on the next album, remarking, "I'm really proud of the last two records, but I think its time to simplify and really get back to what, in all honesty, what we do best."