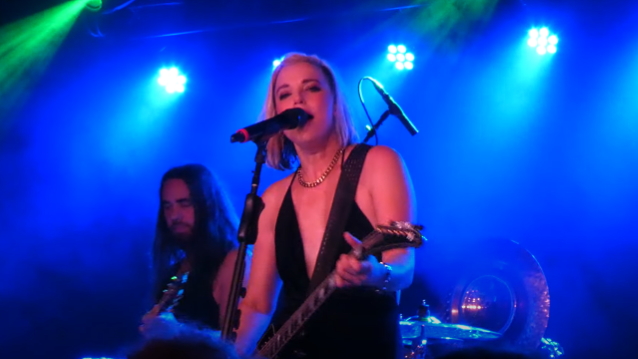 HALESTORM played its first concert in almost two years last night (Friday, July 16) at The Basement East in Nashville, Tennessee. Fan-filmed video footage of the performance is available below.

Earlier in the day, HALESTORM singer Lzzy Hale tweeted: "Tonight's the night. Our first show back in almost two years. Emotions are running hot. I can't even believe it's real. See you there!"

HALESTORM has spent the last few months recording its new album for a tentative late 2021 release. The LP's first single will arrive in August.

During an appearance on the June 11 edition of SiriusXM's "Trunk Nation Virtual Invasion", Lzzy spoke about the progress of the recording sessions for HALESTORM's follow-up to 2018's "Vicious" album. She said: "It's going great. We're actually kind of in the eleventh hour. Everything is starting to really congeal and just reveal itself. So we're at the tail end of it. We already have a first single picked; that just happened. So you're definitely going to be hearing music sooner than later. As far as the release date of the record, I don't have that yet."

Tonight’s the night. Our first show back in almost two years. Emotions are running hot. I can’t even believe it’s real. See you there!

And then Friday was a wrap. Halestorm at Beast. Lzzy totally bringin’ it.