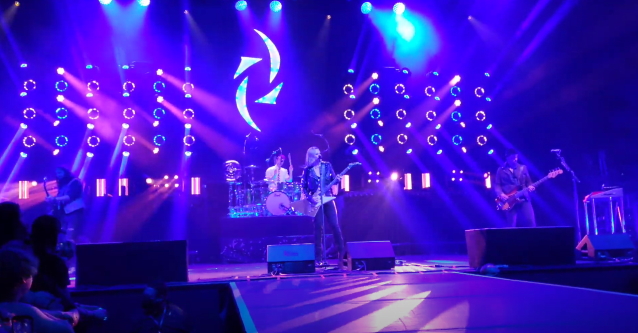 HALESTORM played its first show of 2022 Saturday night (January 1) at Choctaw Grand Theater in Durant, Oklahoma. Video and photos of the performance can be seen below.

A few hours before the gig, HALESTORM frontwoman Lzzy Hale took to her Instagram to write: "Happy New Year! I can't think of a better way to ring it in than being surrounded by my road family and putting on a live rock show. We are performing tonight at the Choctaw casino/resort in Oklahoma! Happy hangover day!!"

Earlier in December, Lzzy told Brandy Richey of Pittsburgh's 105.9 The X radio station about HALESTORM's upcoming LP: "During the time that we were writing it, I got a lot of inspiration by just the stories and just people living their lives and survival stories and literally just conversations that I've had with these people. So, in turn, I feel like even just as an artist, it was a really neat way for me to find myself again and see myself in them, but also in turn I feel like everyone's going to see some of themselves on this album. So, yeah, it's a beautiful thing."