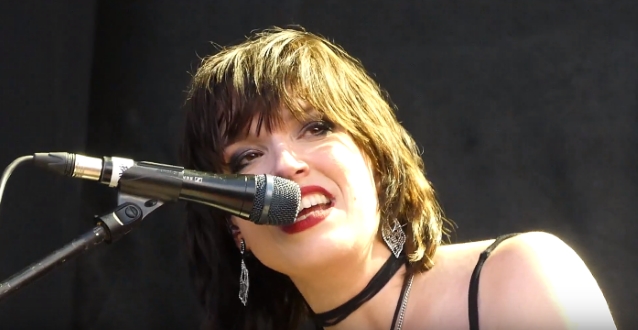 The interactive clip, which was filmed over the summer during HALESTORM's show at the Mohegan Sun in Uncasville, Connecticut, was shot with a multi-rig VR camera system with director Craig Ziogas and producers Mike Mushok (STAIND, SAINT ASONIA) and Charlie Callahan.

"Black Vultures" and "Vicious" are both taken from HALESTORM's latest album, "Vicious", which was released on July 27 via Atlantic. The disc was recorded last year at Nashville, Tennessee's Rock Falcon recording studio with producer Nick Raskulinecz.

HALESTORM frontwoman Lzzy Hale spoke to Consequence Of Sound about "Black Vultures", which starts with an epic scream.

"That particular scream was kind of a whim, because the first version of that particular song, 'Black Vultures', didn't have any of that in it," she said. "It just started off with the riff. And, I remember, I think it was Nick, our producer, he [said], 'Hey can you just like do something vocally, in the beginning, so I did that as a couple of layers just on a whim in the studio, and then we ended up attaching it to the beginning. From there, I think it was the decision, like, 'Oh, I think we should open the record with this.'

"Nick definitely challenged me to be, like, 'You can get intense, right?' And I was like, 'Sure, let's do it.' So, that was a cool experience.

"But that particular song … Nick was working on an ALICE IN CHAINS record on the West Coast, but he kept his studio open for us, so that we can we can keep writing and rehearsing. And one of our good friends from 10 YEARS, Brian Vodinh, ended up hanging out in Nashville one night, and he was like, 'Hey, I want to come to the studio,' and we ended up jamming on this idea, and it was, 'Hey, let's just write a song. We're here.' And he's a great songwriter. So on the way to the studio, I had written down 'vultures,' because I thought it was a cool name. On the way to the studio, there were at least 20 vultures blocking the road, because there was something they were picking at, and I'm, like, 'Ooh, vultures!'

"And so when we got to the studio and Brian showed up, I was, like, 'I have a title.' So, we did this instrumental jam, and then I took it home and I wrote to it, and ended up writing 'Black Vultures'. I didn't realize that the song was kind of about survival until after I finished it."