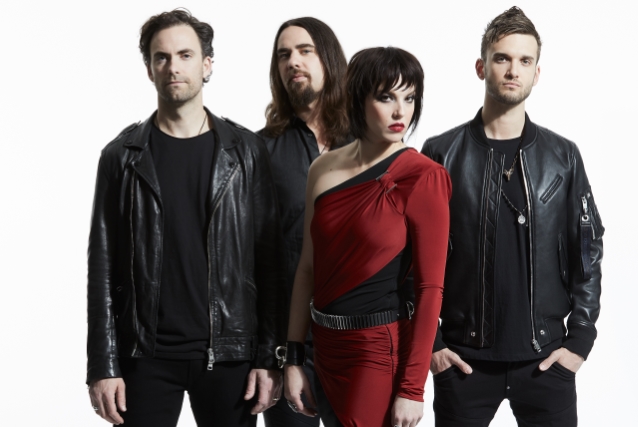 HALESTORM Singer Reveals Whether #MeToo Movement Has Affected Her Songs

According to The Pulse Of Radio, HALESTORM singer Lzzy Hale was asked in a new interview with Consequence Of Sound if the #MeToo and #TimesUp movements had an impact on her lyrics for the band's new LP, "Vicious". Hale answered: "Traditionally, we stay away from religion and politics. That's just not something we necessarily write about. But, especially now, it's not just about politics — it's the state of the world we live in... so, yeah, I think it was kind of unavoidable, that even if we didn't want to have some of those things creep in, I think there was really no choice."

As for whether the movements have had an effect on the music business after turning the movie industry upside down, Hale responded: "I mean, I am a part of the rock world, and I talk about sex, and sex, drugs and rock 'n' roll is very much alive in our world. Thankfully, we've never been in any situations where we can get called out on anything like that. But it's interesting. I don't think it's that the rock industry hasn't been affected by it. I just think it's gonna take a second for all of that to start coming out."

HALESTORM is currently on the second leg of a successful tour consisting of all-female-fronted rock bands, including IN THIS MOMENT and NEW YEARS DAY. Hale told The Pulse Of Radio a while back that previous generations of female artists had a harder time of it. "You know, there are people that have paved the way for myself and, you know, you hear stories about trying to get your record played on radio and, you know, trying to break into anything. It was just such a different time."

Hale noted that she's seen a shift in audiences at the shows, with more women coming than before.

The current leg of the tour ends later this week in California, with a third leg starting on November 16 in Norfolk, Virginia and running through December 16 in St. Petersburg, Florida.