HALESTORM will celebrate the tenth anniversary of the band's debut studio album by releasing "special package" on December 20. Released in 2009, the LP was produced by Howard Benson (MY CHEMICAL ROMANCE, P.O.D.) and featured the single "I Get Off". The band went on to release three additional studio albums, becoming a mainstay on rock radio.

The tenth-anniversary vinyl edition of "Halestorm" will feature all-new artwork as well as pre-production demos and bonus material that tell the story of "how that first album came about and the struggles and wins and the things that happened through the music," according to guitarist Joe Hottinger.

Added HALESTORM frontwoman Lzzy Hale: "It's something special we wanted to show the fans, too. And all of these recordings, they're not redone, they're not remixed — they're literally exactly the way that we did them. It just shows — like Joe says — our journey.

"That whole time that we were in the process of making that first record, it shaped us in the best ways and the worst ways. But, truly, we just wanted to share that with you… It's been fun going through all the old stuff.

"I think that we learned, just by going through this packaging, going through all these things, that, really, ten years later, this latest album, 'Vicious', we got really close to the beginning again. So it feels like it's starting all over again — same feeling."

In a statement announcing the reissue of "Halestorm", Lzzy said: "We lived through a fire, a mudslide, an earthquake and 19 months in Burbank, California to make sure our debut album was released. To celebrate our 10th year anniversary of our debut album on Atlantic Records, we decided to include raw, never-before-heard demos and rejects, new art, and personal letter from me taking you through our rollercoaster ride. I hope you enjoy this special piece of HALESTORM history."

Earlier this year, Hottinger reflected on the last decade for HALESTORM, which saw the band emerge from the small Pennsylvania town of Red Lion. "It's a trip, man," he told Ned from Waterloo, Iowa radio station KFMW Rock 108. "It's the ten-year anniversary of our first record and we're putting together a special package for that first album right now. Lzzy and I just went through all these demos we made from 2005 to 2008 when we were making that first record. I had forgotten all about them. It's like hearing these songs for the first time again. They weren't terrible. There's a reason they didn't make the first record. The thing was there; the magic was there, that we fight for even today. I kind of realized that we're doing what we've always done. We're lucky. I get to do what I love with the people I love and travel the world doing it. What more could you ask for in a life? That's what we were doing back when we were playing bars around Pennsylvania. Just doing what we love with people we love. It was on a much smaller scale. But what a trip. I think we're going around the world twice this year. We end in Australia and Japan again before the end of the year. It's awesome. It's tiring, but awesome."

HALESTORM recently completed a tour with GODSMACK and is expected to begin work early in the new year on the follow-up to 2018's "Vicious" album. Hale has also alluded to working on a secret studio project this past summer but has given no further information. 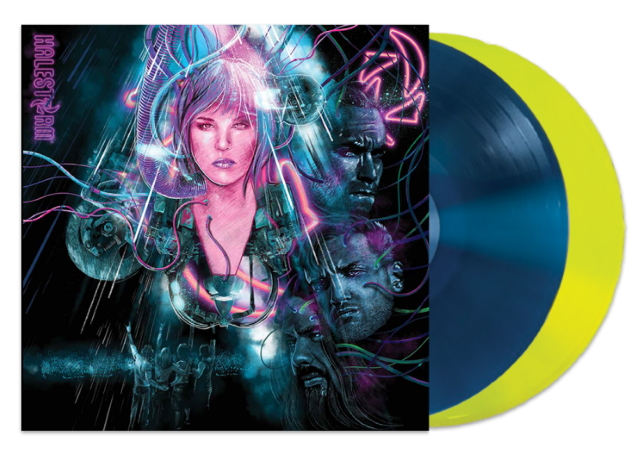