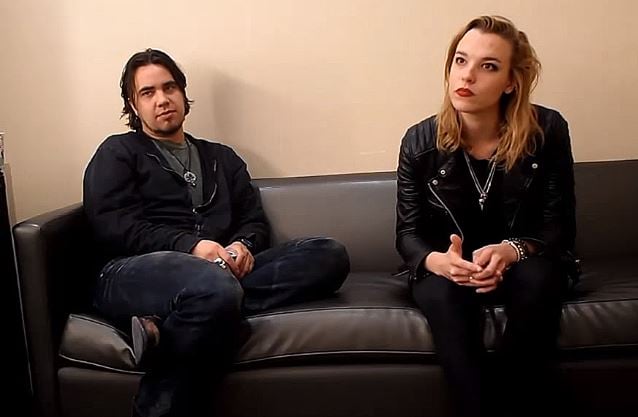 Black Veil Brides CZ conducted an interview with HALESTORM frontwoman Lzzy Hale and guitarist Joe Hottinger prior to the band's November 14 concert in Windsor, Ontario, Canada. You can now watch the chat below. A couple of excerpts follow (transcribed by BLABBERMOUTH.NET).

On KISS bassist/vocalist Gene Simmons's statement that "rock is dead":

Lzzy: "Obviously, rock is not dead. The thing about that statement, for me, is that Gene Simmons is a millionaire; he's a businessman. And so, maybe rock and roll isn't making everybody millions of dollars the way it used to, but we never got into this to make millions of dollars. But from what we see on the frontlines every single night, every country that we play, people come out to the rock show on a Tuesday. You can play in Prague [Czech Republic] on a Tuesday night, and everybody shows up and they've got their fists in the air and they need to be there. So rock is definitely not dead. He's been misinformed. [Laughs]"

On there not being very many female rockers:

"I think there's starting to become more. I think in earlier years, my opinion or my… I think that girls that are my age that grew up with… I was lucky enough to have parents that were very supportive of whatever I wanted to do in life. But growing up, you do have that pressure to get married, have kids, get a normal job, go to college — all these normal things that you are expected to do. Especially as a young girl, we're not encouraged to take the risky route and be a rock star; nobody's encouraging that. Now I think that people are encouraging it more. I think there's parents that are my age now that maybe grew up with everyone saying, 'No, you can't do it.' So I think that there's a lot more parents now that are putting more faith in their children's dreams and wanting to be musicians, or whatever they want to be. So I hope for the future. [Laughs]"