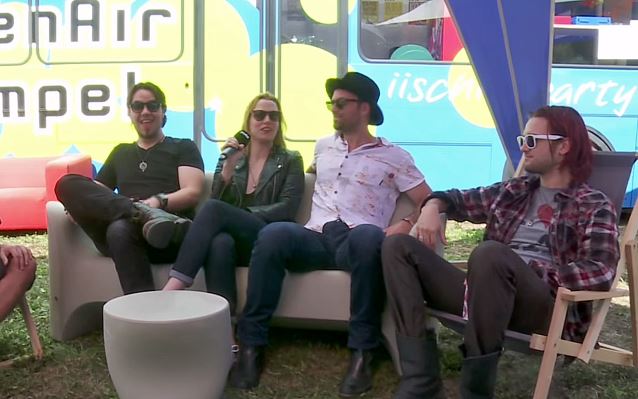 HALESTORM's LZZY HALE On 'Into The Wild Life': We Wanted To Make The Record That We Would Wanna Listen To

On August 20, Joiz conducted an interview with HALESTORM at the 2015 edition of the Open Air Gampel festival in Gampel, Switzerland. You can now watch the chat below.

Speaking about the more spontaneous approach HALESTORM took during the making of its third album, "Into The Wild Life", singer Lzzy Hale said: "This album is very reflective, I think, of where we're at in our lives. And I think it just comes with growing up. We have three albums on a major label now, we've done a bunch of EPs, we've toured the world, and I think we're getting super comfortable in our own skin."

She continued: "We went into doing this record just basically saying, 'Okay, let's just go in there and chase whatever gets us excited and make the record that we would wanna listen to.'

"We did the first two records [by planning everything out], actually: we had all the songs written, all of our parts down, we knew how many songs, what was going on. We literally had it mapped out in the studio — everything that everyone was gonna do — right down to the last day, like, 'Okay, we're gonna be done here.' And I think we just wanted to throw all that away for this record — just be, like, 'Let's not do that.' So we basically went into the studio with a few songs that we knew we wanted to put on the record, wrote the rest of it while we were doing it, and came out with whatever the hell this record is. So, yeah, we're proud of that."

HALESTORM recently tied THE PRETTY RECKLESS's record for the most No. 1 songs on by an act with a female vocalist on Billboard's Mainstream Rock Songs chart.

HALESTORM's "Amen" in July tied the mark established by THE PRETTY RECKLESS when "Follow Me Down" became its third No. 1 on the chart dated May 2.

Previous HALESTORM chart-toppers were "Apocalyptic" (March 28) and the 2013 single "Freak Like Me".

HALESTORM and THE PRETTY RECKLESS are the only two female-fronted bands to lead Mainstream Rock Songs since Alannah Myles's "Black Velvet" topped the chart in 1990, according to Billboard.com.