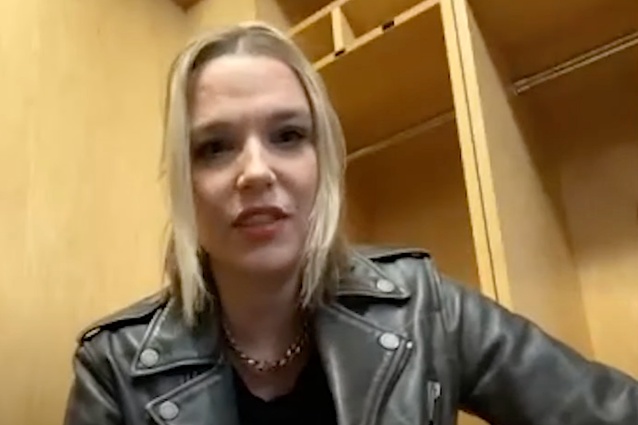 HALESTORM's LZZY HALE Opens Up About Tour Bus Fire: 'We Dodged A Bullet'

The members of HALESTORM escaped unharmed after their tour bus caught Thursday morning (January 20). Earlier today, singer Lzzy Hale spoke to Lou Brutus of HardDrive Radio about the incident, explaining (as transcribed by BLABBERMOUTH.NET): "It happened at three a.m. Nobody was in the bus.

"It was a very emotional day yesterday," she continued. "All day I'm either crying or I was just laughing hysterically at it all and sometimes a combination of the two. Just because it could have gone so left in many ways. It's kind of like we dodged a bullet.

"But, man, playing the show last night [at the DCU Center in Worcester, Massachusetts] after all of that happened was amazing. I don't think I've transcended like that on stage in a long time. I think just the idea that maybe one of us would have gotten hurt, maybe somebody would have died, and the fact that we're all in one piece and together, we literally played that show like it was our last show. And [we're] just very grateful to have each other and very grateful for music, and just with everybody around us and the audience and all of that. So there's a silver lining to it all."

Asked what caused the fire, Lzzy said: "The investigator said it was something electrical — like in the walls or something. It basically started where mine and Josh's [Smith, bass] bunk would have been, which is kind of like mid-bunk hall. And it was just crazy 'cause the whole day I kept telling Arejay [Hale, HALESTORM drummer and Lzzy's brother], 'cause Arejay and I kind of notorious bunk sleepers, even when we have days off — something with hotel rooms, I have trouble sleeping. And for some reason, that day Arejay was, like, 'I'm just gonna do something in the room 'cause I wanna work out.' And I'm, like, 'You know what? I'm just gonna have a bed to myself' or whatever.

"And it's just nuts because our amazing security guy ended up literally busting in with a fire extinguisher from the hotel but could not get back to the bunk hall," she continued. "It was just… According to everybody at the fire department, it was 15-foot flames. So everything was charred. I've lost a lot of things, which is why I'm actually talking to you on my phone instead of my iPad right now. But we're just lucky it's only stuff. It's just stuff, and we're all together, which is great."

HALESTORM is currently on the road with EVANESCENCE as part of the two bands' rescheduled U.S. co-headlining tour dates, which will run through January 21 in Newark, New Jersey.

HALESTORM and EVANESCENCE first toured together in 2012. EVANESCENCE singer Amy Lee later guested on the track "Break In" on HALESTORM's 2020 "Reimagined" EP and Lzzy lent backing vocals to the EVANESCENCE song "Use My Voice" and appeared in the accompanying music video.

HALESTORM is promoting its latest single, "Back From The Dead", which recently became the band's sixth No. 1 at rock radio.

Thank you to everyone for the well wishes. Like Joe said in his post,we lost some stuff, but so grateful that it was only stuff and no one was sleeping on the bus last night. I’m still shook, and emotions are a bit high today.But looks like the universe is not done with us yet!