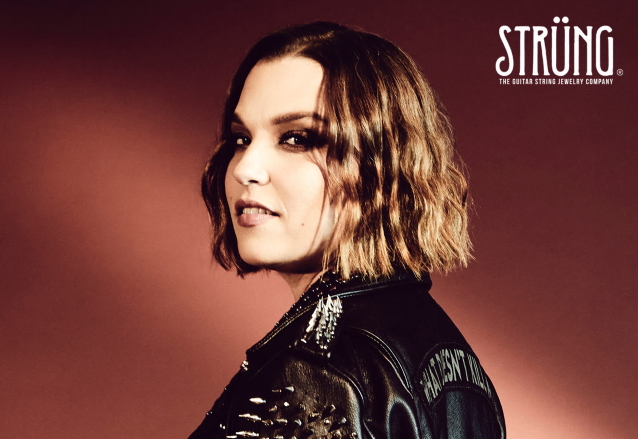 The one-of-a-kind limited-edition necklaces and bracelets are made from the donation of guitar strings from Lzzy's played guitars from stage. Each string is hand wound into a piece of jewelry by Strüng. Each purchase includes an official autographed authenticity card verifying Lzzy's played strings.

Co-owner of Strüng, BLAMESHIFT vocalist Jenny Mann, says: "I've always looked up to and respected Lzzy. She is one of the most down-to-earth people in the industry aside from being an insanely talented female vocalist. We are so grateful to have her on board and can't wait to see what the future holds."

Strüng is a lifestyle brand for music lovers made by musicians Jenny Mann and Tim Barbour who discovered a unique way to repurpose their broken guitar strings and turn them into distinctive jewelry pieces for both men and women themed to a classic song. With over 80 tracks ranging in genres including rock/metal, country/blues, hip-hop/rap and classical music to choose from, customers can wear their favorite song by ordering one of their custom bracelets, necklaces or earrings which comes with a matching charm. Additional shop items include unisex drum cymbal necklaces, beaded bracelets, choker necklace chords and more. Strüng also has a customizable "Send-a-Song" shop where shoppers can pick their own song and matching charm.

According to Guitar Girl Magazine, the idea for Strüng came about in 2012 when Mann and Barbour, original members of the rock band BLAMESHIFT, spent over 200 days touring the country and Jenny noticed all of the strings that guitarist Tim was constantly changing and leaving all over the tour bus. That inspired her to make bracelets from the used strings and she began selling them at their merch table at shows.