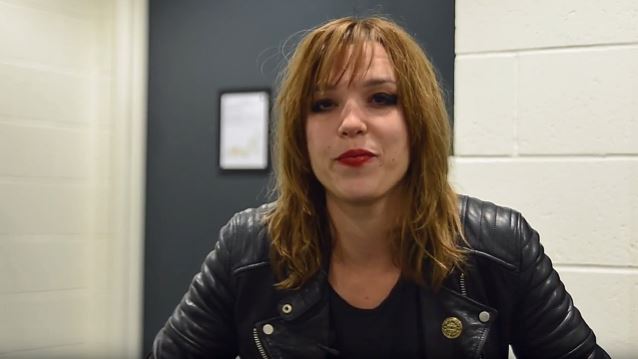 PureGrainAudio loves getting to know artists on a deeper, more personal level so, on February 5, while HALESTORM was in Leeds, England as part of the 2016 "Carnival Of Madness" tour, the site "Tourpedoed" frontwoman Lzzy Hale. Want to know about some of her more "sickly" tour-related experiences? Well, she's one tough woman and was kind enough to share these fun anecdotes.

HALESTORM is among the many top artists who have recorded renditions of EAGLES OF DEATH METAL's "I Love You All The Time" as part of the Sweet Stuff Foundation's "Play It Forward" campaign to aid victims of last November's terrorist attacks in Paris. The track is available now on the iTunes Store, Amazon, and Spotify, as well as the official "Play It Forward Store."

HALESTORM has announced details of a major North American headline tour. The dates begin April 1 at Reading, Pennsylvania's Reading Eagle Theatre in the Santander Arena and extend through late May. Support throughout the trek comes from special guests DOROTHY and the legendary Lita Ford. In addition, the tour will include stops at a number of festivals and summer radio concerts as well as a pair of much-anticipated dates alongside the one and only ROB ZOMBIE, slated for May 18 at Bloomington, Illinois' Cellular Coliseum and May 19 at Saginaw, Michigan's First Merit Bank Event Park.

HALESTORM's third album, "Into The Wild Life", debuted at No. 5 on The Billboard 200 album chart, selling 56,000 copies in its first week of release — more than double the first week haul of the band's previous effort, 2012's Grammy-winning "The Strange Case Of…"