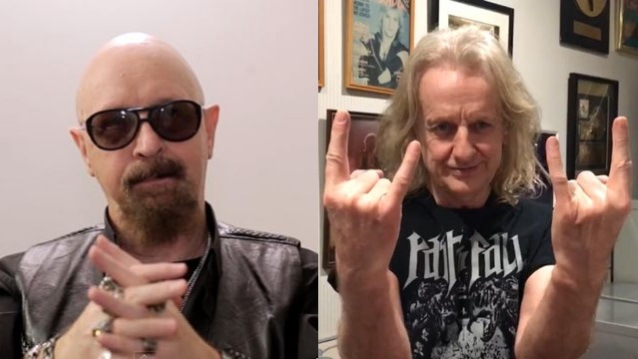 Rob Halford has fired back at K.K. Downing over the former JUDAS PRIEST guitarist's insinuation that producer Andy Sneap was covering Glenn Tipton's parts on the band's new album, insisting that "everything that you hear from Glenn on 'Firepower' is the amazing Glenn Tipton."

Two weeks after Tipton announced that he was retiring from the road due to his battle with Parkinson's disease, Downingreleased a statement in which he said that he was "shocked and stunned" that he wasn't approached to rejoin the band and suggested that Sneap's "contribution to the new JUDAS PRIEST album was much more than just as a producer."

During an appearance Tuesday (February 27) on "The Freaks with Kenny & Crash" show on Phoenix's Fox Sports 910 radio station, Halford responded directly to Downing's comments, calling "a lot" of K.K.'s statement "completely superfluous" and dismissing as "a thousand percent false" the idea that Tipton didn't personally lay down all of his guitar work on "Firepower".

Halford said (see video below): "Let me just say that the great joy of JUDAS PRIEST is that we've never gone into this kind of arena of a public dispute. And it's so easy to fall into that trap in social media today. How many people have you seen in sports, for example, that have made a rash comment on Twitter, just on the heat of the moment, emotionally. You know, we're all human, we've all got feelings, and we have a tendency to blurt out the first thing that is on our minds, and rightly or wrongly, things can kind of come back and chase you afterwards in a negative way.

"So, with regards to everything that was made in [K.K.'s] statement today, a lot of it, to me, is completely superfluous," he continued. "But the one point that I would like to clarify and have on record is this insinuation that Andy Sneap was covering Glenn's guitar parts on 'Firepower', and I can categorically state that that is a thousand percent false. Because I was with Glenn for all of his guitar work, and he worked really, really hard. Imagine this guy in the tenth year of Parkinson's. I've never seen anybody so brave in the fact that every song was a challenge for him to make it work, but he did — consistently, day after day. It was just a very powerful thing to experience firsthand. And this just goes to show you about the amazing stories that surround invididuals around the world that are dealing with Parkinson's in their life.

"So, thank you for that opportunity, Kenny," Halford told "The Freaks" co-host Kenny Sargent. "I just wanted to touch on that one issue, because out of everything that was laid out in that statement, that one hit me personally. And so now I've been able to clarify that and make sure that everybody out in the world listening to the show, on the Internet and elsewhere, understands that everything that you hear from Glenn on 'Firepower' is the amazing Glenn Tipton. Oh yeah!"

Tipton, who is now 70 and has performed on every PRIEST album since the group's 1974's debut set, "Rocka Rolla", is not quitting the outfit, but simply cannot handle the rigorous challenges of performing live. Joining PRIEST for its upcoming dates will be Sneap, who has previously played with HELL and SABBAT.

In his statement on Tuesday, Downing said that he knows "now more clearly than ever" that he did the right thing by leaving the band when he did "as it seems that my time spent in the band, and my value in terms of crafting its huge legacy, was and is unappreciated by more than one member."

Rob Halford: “Tipton on Firepower was ALL Tipton”

Judas Priest Frontman Rob Halford joined The Freaks With Kenny and Crash in the FOX Sports 910 studio prior to the release of Priest’s new record “Firepower” and responded to comments made by former bandmate K.K. Downing in regards to guitarist Glenn Tipton’s work on their new release.