Swedish metal masters HAMMERFALL have been forced to cancel their previously announced summer/fall 2020 North American tour due to the coronavirus pandemic which is sweeping the globe. The trek, with support from BEAST IN BLACK and EDGE OF PARADISE, was scheduled to launch September 14 in West Palm Beach, Florida and conclude on October 19 in Silver Spring, Maryland.

On Tuesday (May 5),HAMMERFALL released the following statement via social media: "Some of you have already started to get your refunds, so now it's official: the North American tour that was to take place in September/October is cancelled. That sucks, but with the current global pandemic wreaking havoc on the world we (meaning the local promoters, booking agent and the band) had no choice. We are hopeful to be able to rebook the tour for a future time, but since everything is so unstable at the moment the decision was made to scrap altogether it and return to it when things have calmed down. We are as sorry for this as you are, but hope you have understanding for our predicament brought on by the Corona virus. Stay safe, stay healthy, stay metal, and take care of each other! #HammerHigh"

HAMMERFALL has been touring in support of its latest album, "Dominion", which was released in August 2019 via Napalm Records. For the disc, HAMMERFALL re-teamed with James Michael to do vocals at Red Level Three studios, and Fredrik Nordström of Studio Fredman at Castle Black Studios for the instruments on the 12-song collection.

Guitarist Oscar Dronjak told Loud TV about "Dominion": "It's one of those things where you have time finally to perfect everything. We didn't really feel that for [2016's] 'Built To Last'. It was stressed, the songwriting part of it. This time, we really felt ready when we started recording, which I don't think has ever happened. All the songs were where they should be. We had time to go back and let them mature. That made it easier to record. We are in a place right now as a band where we feel it's fun. It's happy, fun, because everything sounds good when we play live."

He continued: "I don't think HAMMERFALL has ever sounded better live than we do right now. That feeling, that rush translated into the recording. I think that's what you can hear on it. The songs sound the way they do, they sound, I think they sound perfected, in a way that I don't think the other albums may have done. It's an energy that we didn't have before. We always try to recreate the energy, but it's difficult to actually do it."

Some of you have already started to get your refunds, so now it's official: the North American tour that was to take... 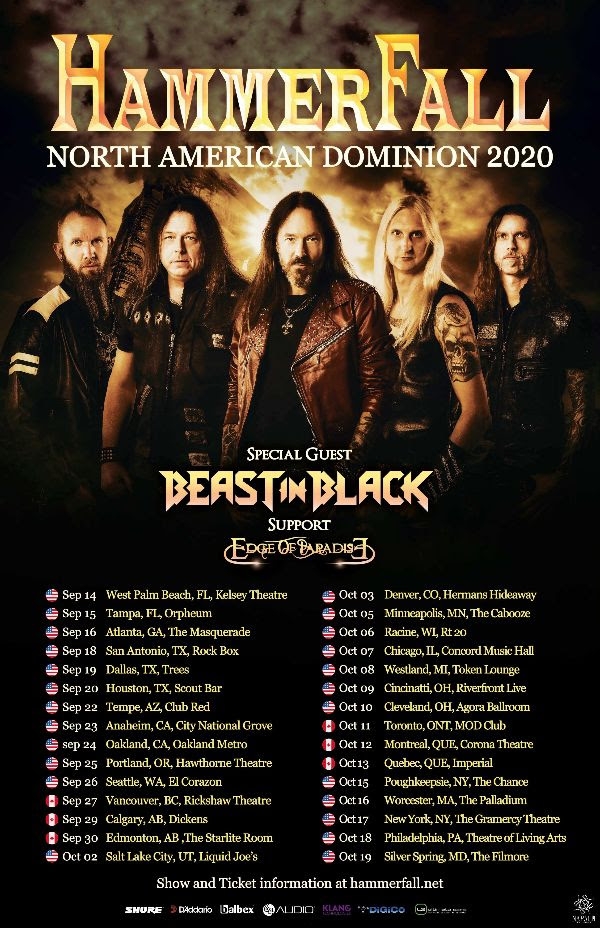