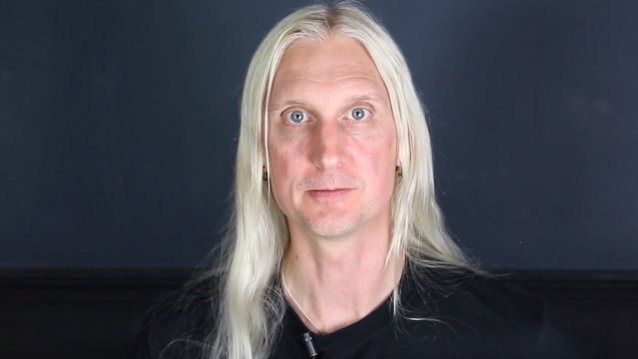 France's Loud TV recently conducted an interview with guitarist Oscar Dronjak of Swedish metallers HAMMERFALL. You can watch the entire chat below. A few excerpts follow (transcribed by BLABBERMOUTH.NET).

Oscar: "It's one of those things where you have time finally to perfect everything. We didn't really feel that for 'Built To Last'. It was stressed, the songwriting part of it. This time, we really felt ready when we started recording, which I don't think has ever happened. All the songs were where they should be. We had time to go back and let them mature. That made it easier to record. We are in a place right now as a band where we feel it's fun. It's happy, fun, because everything sounds good when we play live. I don't think HAMMERFALL has ever sounded better live than we do right now. That feeling, that rush translated into the recording. I think that's what you can hear on it. The songs sound the way they do, they sound, I think they sound perfected, in a way that I don't think the other albums may have done. It's an energy that we didn't have before. We always try to recreate the energy, but it's difficult to actually do it. One of the things that helped with that this time was the drumming of David [Wallin]. Because for 'Built To Last', he played more or less the demo drums that I laid out for him and didn't put his own stamp on it so much. But this time, his personality really shone through. I have to say for the first time I understood how great of a drummer he is. The drumming that makes David David is really good. It's a perfect fit for HAMMERFALL that way, too. He put a lot of his own personality into the fills and the songs this time as well, which is another benefit of being able to have the songs done already early and to be able to go and rehearse and record them as a rehearsal demo, basically, and to listen to them to see what we can do better and change to make the songs better."

On the current state of HAMMERFALL:

Oscar: "The atmosphere within the band has been better than it ever has been. I think we are enjoying what we do more now than we ever have done. Not to say we haven't enjoyed it before, but everything is so much easier right now. Everything just flows. We're in a good flow now, I guess you could say. That makes everything easier."

On what he considers would be the worst period for HAMMERFALL:

Oscar: "I would say, obviously, the things that led to us taking a break for a year and a half in 2012, because we did a couple of tours. We've always been self-managed since day one, but we did try to work with a manager back then for a while to see if he could help the band grow. Instead it almost killed the band. That was definitely the worst period in our history. What happened for us was we got a manager who was good at some things and not good at other things and he insisted on doing everything. Instead of consulting with us, he made a lot of decisions that affected the mood within the band, and our also our financial situation quite a bit. Plus, we had been touring for 15 years, almost at that point. People were a little bit tired of everything. It was good. We needed to take a break for that. We thought that this was going to happen, like, we come back with recharged batteries and all that, but you never know. You never know if everybody wants to continue with a break like that; maybe they're happy where they are right now. Everybody came back, well everybody except Anders [Johansson, drums], obviously. We came back super-excited to go back and continue working. So, I think he wasn't as excited about that idea, plus he had two small kids at home. I think he wanted to be there for them as well. He is 10 years older than I am; he'd been touring for a lot longer than I had, 15 years probably more than I had, at least more than that. Anyway, it doesn't matter. He was tired of the grind, I guess. For us, it was a blessing in disguise because we got David. With that thing we talked before, the energy and all of that, he helped us make it fun again."

On HAMMERFALL's career, which launched in 1993 in Gothenburg, Sweden:

Oscar: "I'm very proud of what we accomplished, of course, over the last 22 years. But I also feel and that is part of the reason why this new album feels so vital and so energized, is because we feel that we have so much more to give, so much more to offer. We're not done writing new music. We're still on the path upward. We've haven't plateaued out and become complacent with what we have. We still want to do new things and bring new fans into the fold and teach them all about our brand of heavy metal. That's very exciting to us. That's one of the things that keeps us going, for sure."

"Dominion" is due August 16 via Napalm Records. For the disc, HAMMERFALL re-teamed with James Michael to do vocals at Red Level Three studios, and Fredrik Nordström of Studio Fredman at Castle Black Studios for the instruments on the powerful 12-song collection.