HAMMERFALL, SUBWAY TO SALLY, JBO and SALTATIO MORTIS have been confirmed for the Full Metal Cruise II — the biggest metal cruise in Europe — which will set sail for the second time April 11-16, 2015. The five-day cruise starts in Palma de Mallorca, heads via Barcelona and Ibiza, and returns to Palma.

In addition, there will be an All-Star Band with Uli Jon Roth, comedy with Bembers, Metal Karaoke, Meet & Greet with the stars, readings, movies, tattooing, metal wellness and musicians‘ workshops and, of course, Mambo Kurt and Blaas Of Glory. The full range of artists who will appear on board, and also ashore, will be announced during the coming months.

"Following the tremendous success and the incredible positive feedback after the last Full Metal Cruise, it is simply a matter of form that we have the next edition of the floating music festival at sea," said Richard J. Vogel, chief executive of TUI Cruises. Thomas Jensen, managing director of ICS Festival Service GmbH, concurred: "After all that planning, we were absolutely thrilled with the success of the first Full Metal Cruise and with the second tour we will again give the fans a metal highlight on the high seas!"

The cruise can be booked starting from 10 a.m. on February 5, 2014. Unfortunately, prior reservations cannot be accepted.

Mein Schiff 1 from/returning to Palma de Mallorca with Full Metal meals and the event programme costs in an inside cabin occupied by two people from €799 per person, including the flight from €1,149 per person. The price for an outside cabin starts at €1,149 per person, including the flight from €1,499 per person. Included in the price are all the meals in almost all restaurants, and also included are Full Metal Drinks, even outside of meal times, in all the bars and lounges. Full Metal Drinks are beer, soft drinks, coffee, tea, alcohol-free cocktails and various wines as well as from 6 p.m. on a wide range of spirits, cocktails and long drinks. 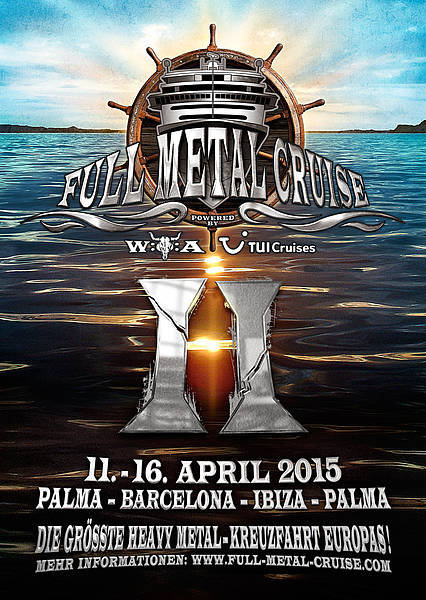