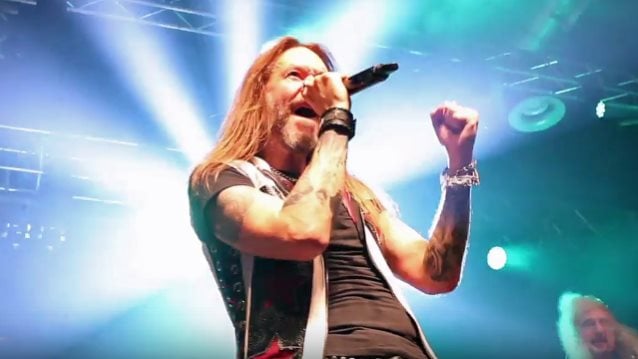 HAMMERFALL To Enter Studio In Early 2019

Swedish metallers HAMMERFALL will spend most of this year working on music for the follow-up to 2016's "Built To Last" album. "We're gonna probably start recording early next year, so there's some time to write new material," bassist Fredrik Larsson told Heavy New York at this past weekend's NAMM show in Anaheim, California (see video below). "And we're gonna do some festivals this summer after the full U.S. tour."

Larsson and HAMMERFALL guitarist Oscar Dronjak also talked about their upcoming North American tour with FLOTSAM AND JETSAM, which will kick off May 17 in Ft. Lauderdale, Florida and criss-cross the continent before concluding on June 19 in San Antonio, Texas.

"That's basically the most important thing that we do [this year]," Oscar said. "First of all, it's the next thing we do, 'cause we have nothing planned until mid-May. But also because it's the only big tour that we have still left for this year. We were gonna do maybe a week or two in Europe; we haven't decided yet. We'll see what happens with that. But no big touring anymore this year. So that's gonna be the next big thing for us, so we're really looking forward to it." Fredrik added: "Especially since the last tour here in North America was fantastic. We had a great response, and we did a co-headline with DELAIN, and it was fantastic."

"Built To Last" was released in November 2016 via Napalm Records.

Drummer David Wallin left HAMMERFALL two years ago in order to focus on his family life. He has since been replaced by Johan Koleberg, formerly of THERION and LION'S SHARE.