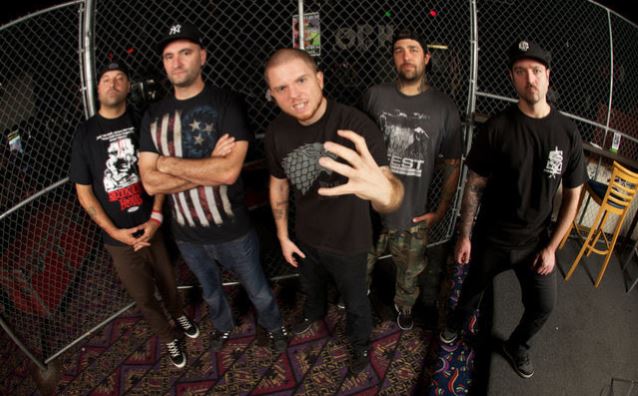 New Haven, Connecticut hardcore giants HATEBREED have renewed their relationship with Nuclear Blast by signing a brand new, worldwide deal with the label. The group previously released its last album, "The Divinity Of Purpose", through Nuclear Blast in Europe, and now the band has chosen to expand its partnership with the company by including North America in the contract.

Comments HATEBREED vocalist Jamey Jasta: "HATEBREED signing to Nuclear Blast worldwide could not come at a better time and we're extremely excited to get this new album out and commence the world tour in 2016 and 2017! Our diehards have been patiently waiting for headline dates and new songs. We can't wait for everyone to hear what we have been working on!"

HATEBREED is currently in the studio with longtime producer Chris "Zeuss" Harris (ROB ZOMBIE, SUICIDE SILENCE, WHITECHAPEL) recording its new album for a spring 2016 release via Nuclear Blast Entertainment. The CD will be mixed by Josh Wilbur, who has previously worked with LAMB OF GOD, MEGADETH and GOJIRA.

"The Divinity Of Purpose" sold 17,000 copies in the United States in its first week of release to land at position No. 20 on The Billboard 200 chart. The cover artwork was created by Eliran Kantor (TESTAMENT, ATHEIST, SIGH, ANACRUSIS, GWAR).