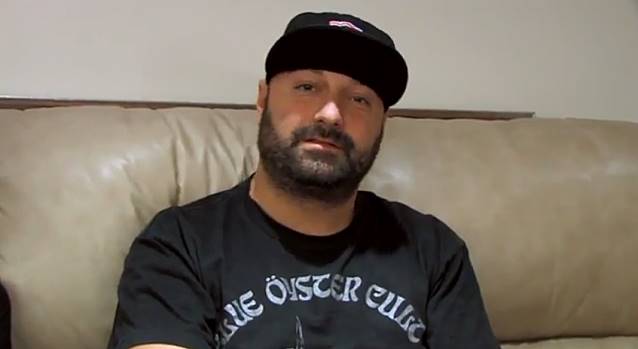 Serbian-Metal.org conducted an interview with guitarist Frank Novinec of Connecticut hardcore/metal masters HATEBREED on February 23 in Belgrade, Serbia. You can now listen to the chat using the SoundCloud widget below.

HATEBREED bassist Chris Beattie sat out the band's fall 2013 North American headlining tour after sustaining an injury in an accident. His temporary replacement on the road was Matt Bachand of SHADOWS FALL.

HATEBREED's latest album, "The Divinity Of Purpose", sold 17,000 copies in the United States in its first week of release to land at position No. 20 on The Billboard 200 chart. The CD was made available on January 29, 2013 in North America via Razor & Tie and on January 25, 2013 in Europe through Nuclear Blast. The CD was co-produced by HATEBREED, Chris "Zeuss" Harris (SUICIDE SILENCE, ALL THAT REMAINS, SHADOWS FALL) and Josh Wilbur (LAMB OF GOD, AVENGED SEVENFOLD),with Wilbur also handling mixing duties. The cover artwork was created and illustrated by Eliran Kantor (TESTAMENT, ATHEIST, SIGH, ANACRUSIS, GWAR).