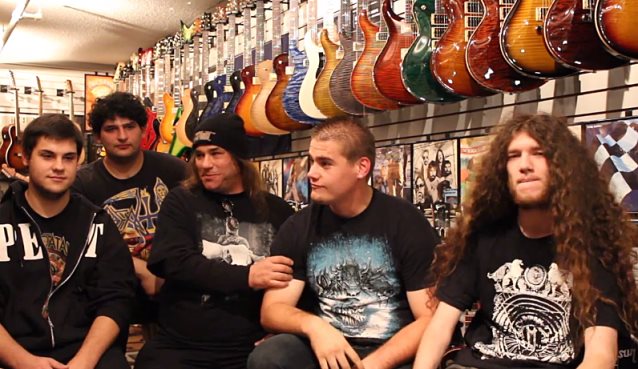 HATRIOT Talks To 'In The Vault With Shanda Golden' (Video)

"In The Vault With Shanda Golden" (web site) conducted an interview with HATRIOT, the band led by former EXODUS and LEGACY (pre-TESTAMENT) frontman Steve "Zetro" Souza. You can now watch the chat below.

HATRIOT entered the studio in September to begin recording its sophomore album, "Dawn Of The New Centurion", for a February 2014 release via Massacre Records. The follow-up to 2013's "Heroes Of Origin" is once again being helmed by producer producer Juan Urteaga, who has previously worked with MACHINE HEAD, EXODUS and TESTAMENT, among others.

"Over the past year, HATRIOT has grown tighter as a band, and the songs on the new record will reflect that," said Souza. "The songs are longer and more melodic, while keeping the classic thrash metal feel that we are known for.

"'Heroes Of Origin' was our 'Kill 'Em All', and 'Dawn Of The New Centurion' is our 'Ride The Lightning'."

The first single from "Dawn Of The New Centurion" will be "The Fear Within".

HATRIOT will be touring Europe in December, and plans on including some new material into its live set.

HATRIOT filmed a video for the song "And Your Children To Be Damned" on March 10 at Arlene Francis Center in Santa Rosa, California. The clip was directed by Mike Sloat, who has previously worked with MACHINE HEAD and TESTAMENT.

"And Your Children To Be Damned" was written about Countess Bathory, a countess from the renowned Báthory family of nobility in the Kingdom of Hungary, who has been labeled the most prolific female serial killer in history, although the number of murders is debated.

HATRIOT's drummer is none other than Steve's son, Nicholas Souza. Nicholas auditioned for the band after the departure of Alex Bent and "proved himself to be the best choice," according to Steve.

HATRIOT's lineup also includes Zetro's son Cody, who got his first bass as a present from his father after Zetro bought it off current EXODUS bassist Jack Gibson. "I told him," Zetro said in a recent interview with Metalholic.com, "'You have to try out [for the bassist position in HATRIOT if you want to be in the band]. There's no nepotism here, boy. If you can hang, you're on.' So he actually tried out, and he got the gig."

Regarding HATRIOT's musical direction, Zetro said, "It's in the vein of typical Bay Area thrash, but these guys are a lot younger, so there's gonna be some blast-beats in there. There's gonna be some kind of death [metal] approach to it, a little bit. 'Cause these guys are new. They're raw, and they're fast, young, heavy, hard and aggressive, and I'm trying to convey that along as well."

He added, "These new kids seem to understand what we did in the '80s, but still bring a little bit of a new essence to it. We put that together with what I write vocally and it's turned out to be really, really killer. It's good stuff."

"And Your Children To Be Damned" video: