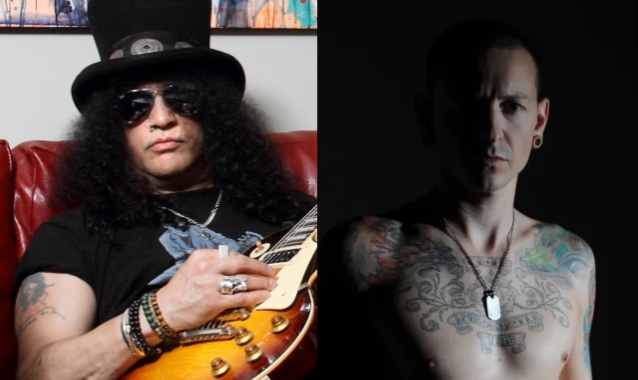 A one-minute snippet of a never-before-heard collaboration between GUNS N' ROSES guitarist Slash and late LINKIN PARK singer Chester Bennington can be streamed below. The track, called "Crazy", was intended for Slash's first solo album, although he ended up recording it for the LP under the title "Captain Alibi" with late MOTÖRHEAD frontman Lemmy Kilmister on vocals.

The "Crazy" snippet was made available by music producer Big Chris Flores, who worked on Slash's aforementioned album more than a decade ago. Around 2019, Flores went back to the studio and reprogrammed the drums as well as played the bass on the track, which will reportedly be released in the not-too-distant future to benefit 320 Changes Direction, the mental health awareness organization launched by Chester's widow Talinda Bennington.

During an appearance on the GUNS N' ROSES-centric podcast "Appetite For Distortion", Flores stated about working with Bennington: "We sent him the demo and set up a session. Chester came in for literally probably a few hours, recorded it and was, like, 'Hey, can I hang out for a little bit?' and that was the last of it. It was one or two takes when he got here. There was nothing really to it."

As for why the recording never ended up seeing the light of day, Flores explained: "I think part of the reason it got shelved for so long was out of respect, just waiting for LINKIN PARK to release whatever they were going to release with Chester and then give Talinda and his mom time to figure out if they wanted to do anything with it. Slash hadn't heard anything from them and it just was forgotten about I feel like, so it was just perfect timing [to release a snippet]."

Slash discussed his Bennington collaboration in a 2018 interview with Variety. He recalled: "When I was doing my first solo record, I worked with a lot of different people, some of whom, for whatever reason, didn't end up on the record. One was with Chester. We did a song and LINKIN PARK at the time didn't allow it to happen, so I did it with Lemmy. The guy who engineered my demos sent it to me and I sent it to Chester's family."

The guitarist added that the song could be released at some point, saying: "His family has got it, so it would be totally up to them. It was really good. He was awesome. It would be fine with me if they wanted to [release] it. Musically, it's basically the same as the Lemmy song, but the lyrics are really poignant."

The self-titled 2010 project featured a different guest vocalist on each track, including Ozzy Osbourne, Fergie, Chris Cornell, Kid Rock, Myles Kennedy, Iggy Pop, M. Shadows and others. Slash told The Pulse Of Radio at the time how he went about getting all those singers involved: "I compiled, you know, a bunch of songs with a definite idea as to who would sound good on what. Then I had to make a presentable demo, call up the artist and go, 'I've got this song, I'm doing this record with all these different singers on it, and I would love for you to be on it and I have a song I think you would like,' and then send it to them. And then I got positive feedback all the way along the line there."

Slash released his fourth solo album and third with his band THE CONSPIRATORS, titled "Living The Dream", in September 2018.