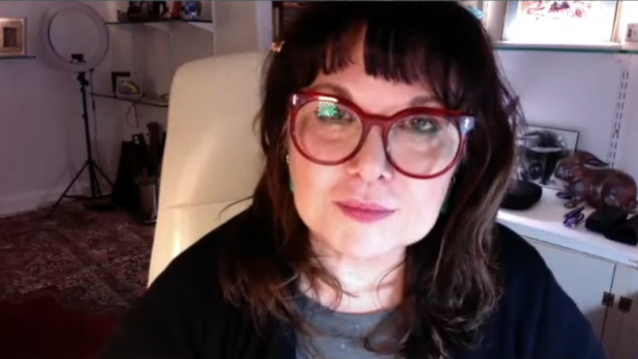 HEART's ANN WILSON Praises DOLLY PARTON For Offering To Take Herself Out Of Running For ROCK HALL: It Was 'Beautiful'

HEART's Ann Wilson has praised Dolly Parton for offering to take herself out of the running for the Rock And Roll Hall Of Fame's 2022 class of inductees.

Earlier in the month, the 76-year-old country music legend asked the Hall to withdraw her name from the 2022 ballot, saying "I don't feel that I have earned the right. I really do not want votes to be split because of me, so I must respectfully bow out."

Parton is one of 17 artists nominated for the Rock Hall class of 2022, along with Eminem, Lionel Richie, RAGE AGAINST THE MACHINE, JUDAS PRIEST and Beck, among others.

Wilson, who was inducted into the Rock Hall in 2013 as a member of HEART, was asked about Parton's offer to bow out of the highly esteemed honor during an interview with "The Chuck Shute Podcast". She said (as transcribed by BLABBERMOUTH.NET): "I thought that her response was beautiful. She doesn't need to freeload on another genre. She's totally cool for doing that, as far as I'm concerned.

"The Rock Hall is becoming less and less about rock," Ann continued. "And I just thought that her response was perfect. And she maybe has always talked about making a rock and roll album, but I don't know. She is country; she's one hundred percent through and through country. That's what so cool about her. She's just one of a kind."

Two weeks ago, Ann's sister and HEART bandmate Nancy Wilson also praised Parton, telling the 95.5 KLOS radio station about Dolly's offer to take herself out of the running for the Rock Hall: "How classy… It's really cool for her to step down like that, because the category is so broad. Like, Dionne Warwick is not a rock performer, and a lot of them are not, and they should make different categories under the bigger Rock And Roll Hall Of Fame moniker. They should have a Country Hall Of Fame and a Pop Hall Of Fame and a Rap Hall Of Fame and a Rock Hall Of Fame. I think that would be really smart, if they started to do that. 'Cause I've gotta vote for it, like, tomorrow."

Nancy, whose band was inducted into the Rock Hall by fellow Seattle native Chris Cornell of SOUNDGARDEN, continued: "It's really tough because Lionel Richie is in there. If you try to narrow it to what really is rock, it excludes too many others. So I think she's really a class act to have done that. It makes me wanna write a rock record with her… I should give her a call. She can do anything. She's written some of the best songs in our history. She can do it."

On March 17, the organizers of the Rock And Roll Hall Of Fame declined Dolly's request to pull her nomination, in part because voting is already well underway. That same day, during an interview on "Fox & Friends", Parton doubled down on her discomfort with being included in the Hall's pantheon.

"Well, I didn't feel exactly right about that because my perception, and I think the perception of most of America, I just feel like that’s more for the people in rock music," she said. "I've been educated since then, saying that it’s more than that, but I still didn't feel right about it. It kind of would be like putting AC/DC in the Country Music Hall Of Fame. That just felt a little out of place for me."