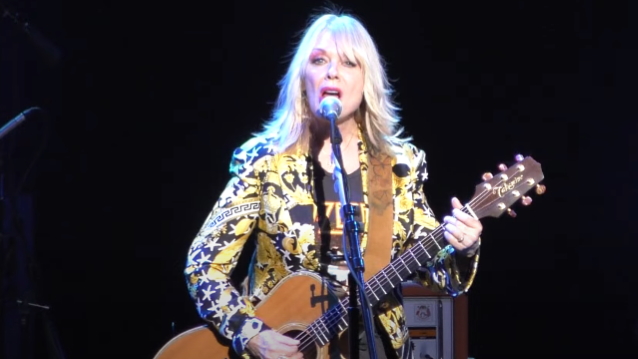 Nancy said (as transcribed by BLABBERMOUTH.NET): "We play a lot of HEART music. We also play some of my own music. But we play live — we're completely live. We plug in and we sing and we play, and there's no Pro Tools involved at all. So that's kind of unusual these days. We've got skin in the game, and we play live."

Asked what her approach is to the HEART music when she performs with NANCY WILSON'S HEART, Nancy said: "I love these songs that I helped to create. And also I've got a really amazing band and an amazing singer, Kimberly Nichole, who was a finalist on 'The Voice' show at one point. And she rocks; she's a rock singer. And she can achieve these songs that I, myself, as more of a guitar player than a real singer — I love singing, but she's the one who can pull off 'Barracuda', 'Crazy On You' and some of these big, kind of iconic songs that it's real fun to play… I love singing. So I sing a lot, just to give Kimberly Nichole a break from some of the more challenging songs that I can't do myself. But we have a really great team of players — everybody that I worked with on the last HEART tour, basically, player wise, and Kimberly Nichole. It just rounds it out so that I can do whatever the heck I want on a rock stage and do the songs I love doing. So, yeah, I'm real happy with this lineup."

NANCY WILSON'S HEART's setlist includes HEART classics "Crazy On You", "Barracuda", "Kick It Out", "Straight On" and "Even It Up" as well as nods to 1980s favorites "Alone" and "These Dreams". There are also covers of songs originally written by Paul McCartney and WINGS, THE CRANBERRIES and LED ZEPPELIN. NANCY WILSON'S HEART also pays live musical tributes to FOO FIGHTERS drummer Taylor Hawkins and legendary VAN HALEN guitarist Eddie Van Halen.

Earlier this year, Nancy spoke to Joe Rock of Long Island, New York's 102.3 WBAB radio station about why she chose the name NANCY WILSON'S HEART for her new band. She said: "HEART had a big offer on the table last year for a bigger tour, but Ann [Wilson, HEART singer and Nancy's sister] wasn't interested in going out with my lineup of guys that we were out with before. She has a new lineup of guys that she wanted me to join up with. And I sort of [thought] I don't really know them and don't have loyalty yet for anybody like that. So I just kind of shined it on and decided when I do go out with my new singer Kimberly, I can telegraph to the people coming to the show that they're gonna hear HEART songs in a whole different way than ever expected with… No comparison to Ann singing or Kimberly singing those same songs, just because it's apples and oranges; you can't compare that stuff. So I figure that's a way to let them know that it's not just Nancy WilsonofHEART doing whatever, but it's NANCY WILSON'S HEART where you're gonna hear more HEART stuff."

NANCY WILSON'S HEART made its debut in February as special guest for STYX's five-show 50th-anniversary engagement at Venetian Theatre in Las Vegas. The concerts saw STYX join Wilson mid-show for HEART songs, and Wilson jams along to STYX classics.

Nancy's debut solo album, "You And Me", was released in May 2021 via Carry On Music. The LP was recorded primarily in her California home studio, working with bandmembers and special guests remotely.

NANCY WILSON'S HEART, LIVE FROM THE COZY CONFINES OF THE DES PLAINES...