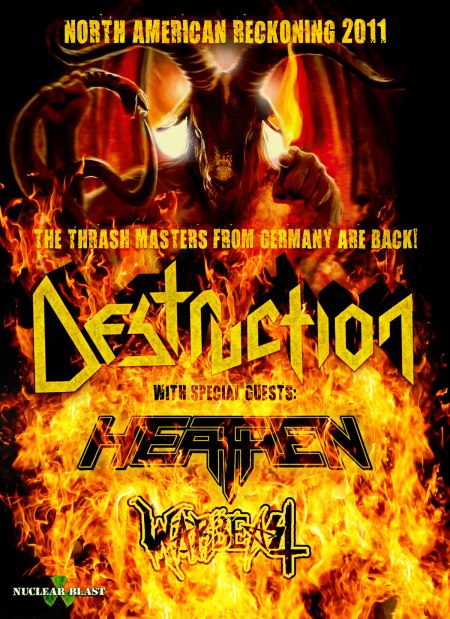 Commented DESTRUCTION bassist/vocalist Marcel "Schmier" Schirmer: "DESTRUCTION wishes Keith a safe and quick recovery! In the meantime, we are really happy to announce their old friends HEATHEN as a replacement for DESTRÖYER 666! These Bay Area thrashers are one of my favorite thrash bands of all time and we will be sharing the European stages with them in some weeks on the 'Killfest' tour. It's fantastic to have an opportunity to tour with old friends on both sides of the globe! German and Bay Area thrash together on tour — how much more kick-ass can it get?! I can't wait to hit the road again now. Hope to see you all out there!"

DESTRUCTION's new album, "Day Of Reckoning", will be released on February 18 via Nuclear Blast Records. The first limited edition of the album will not feature the band's logo on the booklet while the vinyl version and second pressing of the CD will show a red DESTRUCTION logo on it.

"Day Of Reckoning" is the first album to feature DESTRUCTION's new drummer Vaaver (INDUKTI, ex-UNSUN). The band stated, "Some of you may have seen him already with the band on [last] year's summer festivals. He is a studied musician (McGill University of Montreal) and is a Polish-Canadian citizen!"

VieBrooks is filling in for regular HEATHEN bassist Jon Torres, who was forced to sit out the San Francisco show and the upcoming European tour with OVERKILL and DESTRUCTION in order "to focus on his health."

HEATHEN's lineup for the upcoming tour will be as follows: