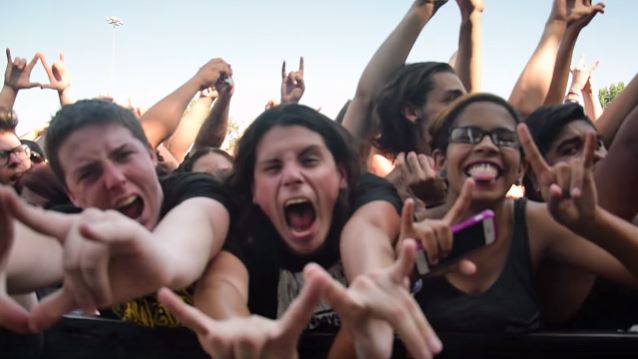 A Canadian psychology professor has claimed that heavy metal can help promote scientific thinking in the classroom.

In a recently published article, Rodney Schmaltz, assistant professor in the Department of Psychology at McMaster University in Edmonton, Alberta, argues that cases where heavy metal has been implicated in graphic and disturbing crimes can provide educators with a way challenge students to consider what evidence they have used to assess the impact of music on behavior.

One of the examples that Schmaltz brings up is JUDAS PRIEST's 1990 subliminal-message trial in Reno, Nevada where the band was found not liable for the deaths of two young men who cited the band's music as the reason they killed themselves. He writes in the open-access journalFrontiers In Psychology for their series "Novel Approaches To Teaching Scientific Thinking: Psychological Perspectives": "[The JUDAS PRIEST] case can lead to an interesting class discussion on how extraordinary claims require extraordinary evidence. The claim that a backwards, subliminal message can lead someone to take their own life is an extraordinary claim. Students can be challenged to describe how they would experimentally test the impact of subliminal messages on behavior, followed by a class discussion of how the actual research was conducted in the field. This is an engaging example to help students better understand variable manipulation, demand characteristics, and issues of generalizability. At least in the case of subliminal messages, students will learn that music does not lead to problematic or harmful behavior."

Schmaltz also discusses the 1996 case where two teenagers were charged in the murder of a 15-year-old girl and later claimed they took inspiration to commit the crime from lyrics in the SLAYER songs "Postmortem" and "Dead Skin Mask". The parents of the victim sued SLAYER and their record label for unlawfully marketing and distributing obscene and harmful products to minors.

The professor writes: "Students should be challenged with providing the nature of the claim, and then exploring the evidence supporting the claim. Is the evidence sufficient to demonstrate a causal relationship between heavy metal and problematic and deviant behavior? One approach to further engage students is to divide the class into groups to act as the prosecutor or defense in a mock trial of the SLAYER murder case. The value in using this case is that the real-world outcome is known. The case did not go to trial, as the perpetrators of the crime had a history of criminal behavior, drug and alcohol abuse, as well as other factors that clearly demonstrated that listening to the music of SLAYER was not the cause of the horrific crimes."

Schmaltz goes on to cite the lack of scientific evidence in support of the argument against heavy metal, pointing out that subsequent research has shown that "people who were fans of heavy metal music in adolescence fared better in many aspects of their adult lives than people who were not fans."

He writes: "The value of using examples in heavy metal is that instructors can refer to the research that sheds light directly on the relationship between harm and this style of music. By using examples from heavy metal music, instructors are able to pose the question of the relationship between harm and heavy metal, allow students to consider the claims, apply critical thinking skills, propose how these claims should be tested, and finally solve the mystery with data from the relevant literature."

You can read Rodney Schmaltz's entire article at the Frontiers In Psychology web site.