Century Media Records and Prowling Death Records have announced the joint release of HELLHAMMER's previously unreleased "Blood Insanity" 7" vinyl single. Originally conceived by the band in 1984, this piece of metal history will finally see a worldwide release on August 19, with pre-sale being launched via CM Distro on July 22.

HELLHAMMER mainman Tom Gabriel Warrior comments: "In early 1984, after HELLHAMMER's third demo, 'Satanic Rites', HELLHAMMER bassist/singer Steve Warrior, HELLHAMMER roadie Marco Dinosaur Suremann, and I contemplated properly releasing some of the music HELLHAMMER had recorded the year before. We planned a NWOBHM-style 7" vinyl single, containing two songs taken from the 'Triumph Of Death' demo recording sessions of June 1983. The single was to feature 'Blood Insanity' as a title track, and 'Maniac' as its b-side. The cover of the single was to be a photo taken by HELLHAMMER photographer Martin Kyburz in early 1983. We drafted a brief typewriter memo, recording the outline for this single proposal.

"At the time, it was difficult and prohibitively expensive for a band to directly contract a manufacturing plant to produce a vinyl record without the involvement of a record company, so the single eventually remained a mere idea, while HELLHAMMER ultimately signed with Noise Records in West Berlin. The 'Blood Insanity' single project thus languished in an unrealized state until the eventual dissolution of HELLHAMMER rendered any plans for further HELLHAMMER releases redundant.

"Nonetheless, the unrealized single never really faded from my memory throughout all the commotion associated with HELLHAMMER's past existence during the many years since the band's termination. Moreover, Prowling Death Records, founded in my bedroom in 1983 to release the HELLHAMMER demos, had in the meantime become a proper record company. When I presented the idea to Century Media Records, the long-standing licensing partner of Prowling Death Records, they immediately pledged their support.

"The original single was to be issued in a simple card sleeve; but the gatefold format now chosen allows us the luxury to expand the visual presentation: the outside representing the single exactly as it was to be in 1984, the inside adding information about the project's history.

"The result is this single, produced in full coordination with the HELLHAMMER members who played on these songs and designed as faithfully as possible in accordance with the original concept we devised 32 years ago. It features the Prowling Death Records number we originally assigned to it: PDR 007."

The "Blood Insanity" 7" release is limited to a one-time only pressing of 3,000 copies and will be available in the following vinyl editions:

All 7" vinyl single copies will be housed within a gatefold sleeve, then shrink-wrapped in plastic and marked with a different colored sticker (golden color for the picture 7") to indicate its respective edition.

In related news, Tom Gabriel Warrior's current band TRIPTYKON has just announced two special warm-up concerts in Germany before their appearance at the 2016 edition of the legendary Wacken Open Air festival. The two intimate warm-up concerts will take place in the week before the festival, on August 3 (Freiburg) and August 4 (Essen). 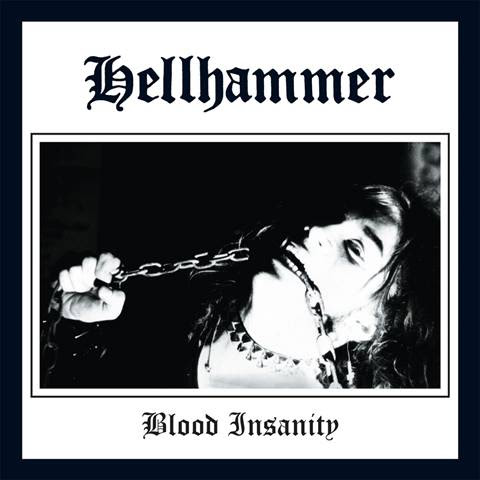