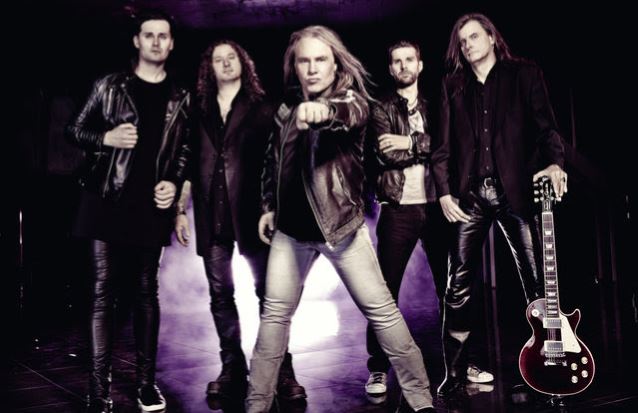 As pioneers of German melodic speed metal, HELLOWEEN are not only one of Germany's most respected metal exports but also one of the globally most influential metal bands today.

Since 1984, HELLOWEEN has performed at all important festivals such as Rock In Rio and Woodstock in Poland, which they headlined in front of over 500,000 fans. The band played countless world tours, delivered spectacular shows with colleagues such as IRON MAIDEN, SLAYER and Ozzy Osbourne, released fifteen studio and three live albums, and sold more than eight million records. With fourteen gold and six platinum awards under their belt, they scored their career-highest German album entry in 2013 and landed in Billboard's Top 100.

Obviously, HELLOWEEN are far from running out of steam: Their 30th anniversary sees the publication of their first book, the "Hellbook". With this, the pumpkinheads from Hamburg present a long-awaited fan item that documents 30 years of metal passion and is the only official reference work of its kind so far.

Said HELLOWEEN bassist Markus Grosskopf: "For us, this book is highly emotional and evokes a thousand memories. Good moments as well as not-so-good ones are captured here. 30 years of HELLOWEEN on almost 500 pages — and no end in sight."

The "Hellbook" is a singular tribute to the European metal gods. On 498 pages in the format 22x28cm, this tour de force of speed, power and rhythm initially takes us back to the roots. We witness their most important and renowned moments, as well as their darkest and most tragic hours: The true story of Kai Hansen, Michael Kiske, Andi Deris, Michael Weikath, Ingo Schwichtenberg, Markus Grosskopf, Roland Grapow, Uli Kusch, Dani Löble, Sascha Gerstner and other masters is told for the first time officially, and accompanied by high-quality and partially unreleased live and backstage images.

Said Hansen: "We had great years and a fantastic time, that, looking back, makes the downsides that come with everything big seem insignificant."

With its premium artwork, designed by illustrators and designers like the mysterious Frederick Moulaert and Marcos Moura, a 350gr soft cover, and 150gr paper, the "Hellbook" is a 2-kilogram must-have for hardcore fans and a true treasure for collectors: The comprehensive and complete legacy of a legend, alive and necessary — and a collage of their dreams, dedicated to one of the biggest German heavy and hard rock bands of recent years. The "HELLOWEEN Bible" was initiated by Carlos Vincente Leon and David López Gómez from Spain, who penned this masterpiece with blood, sweat and tears by fans for fans.

Said Deris: "A reference book, even for myself. I'll probably flick through the pages in 20 years going: 'Really? That's how it was? Cool!'"

The deluxe edition is strictly limited 3-kilogram heavy weight, manually numbered, and personally signed by the band members, including Kiske and Hansen. The golden hardcover and high-quality protective cover wrapper printed with UV coating contains 556 pages — 58 pages more that the "Hellbook"'s standard edition. These 58 pages are the "Hidden Treasures" with copies of originals from the band's early days: private stories like the first record deal, the development of the logo, pictures from times before HELLOWEEN and much more. The "Hidden Treasures" are printed on 150gr. maxisatin /glossy paper.

Said Kiske: "I haven't been dealing with these years for almost two decades now. Looking at all the forgotten pictures now brings back lots of memories; good memories! It's great to have a book like this!"

The "Hellbook" will be exclusively available via www.helloween.org from October 31 in the standard and deluxe versions, which is strictly limited to 777 copies.

Added Weikath: "I wonder if this story will ever end. Flipping through the pages, there are many details I didn't know, didn't realize, or forgot. Here's hoping it will entice and thrill the interested reader — and do some good in unforeseeable ways." 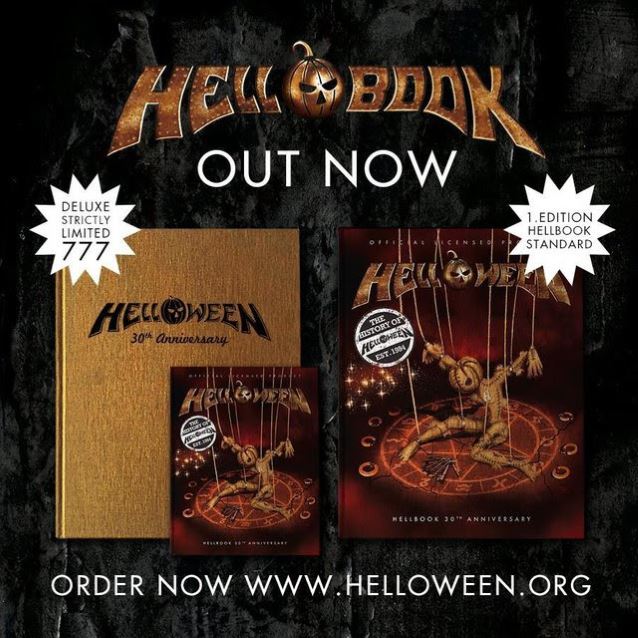